Can you imagine that in about a year Covid-19 will be largely behind us, and air travel will be back to pre-Covid levels? What about in two years? Is it reasonable to believe that post-vaccination, post-Covid, there is likely to be pent up demand for air travel that’ll benefit companies such as United Airlines? This seems likely, in our view. Considering this, is this a good time to enter United Airlines stock which has lost close to 60% of its value this year? It probably is, considering United’s relatively strong performance versus peers prior to the pandemic and its relatively quick recovery post the 2008 crisis, although its weaker cash position remains a slight concern.  Our dashboard United Airlines Is Trading Cheaply briefly summarizes why United could be a good buying opportunity.

United Airlines’ stock trades at about $37 currently and has lost 58% in value year-to-date, as demand for air travel fell sharply due to the Covid-19 pandemic. United traded at a pre-Covid high of about $88 in early January and is currently 58% below this peak level. In comparison, American Airlines’ stock is down by about 55% year-to-date. The stock has recovered 40% from the low of a little over $26 seen in March 2020, driven by the government’s multi-billion-dollar bailout package for airlines and a gradual re-opening of the economy. 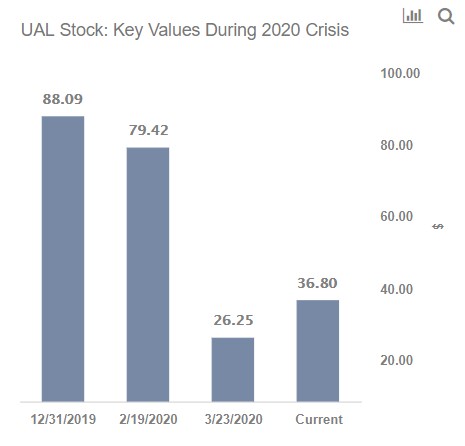 Looking at the airline’s performance during the 2008 crisis should also give investors a perspective of how the stock has rebounded from major sell-offs in the past.  The stock fell from about $45 in October 2007 to a low of about $5 in March 2009 – losing close to 90% of its value. However, the stock recovered considerably within a year – rising by over 160% from the March 2009 lows of $5 to about $13 in January 2010. See our dashboard How United Airlines Performance Over Covid-19 Compares With 2008 Crisis

Q2 2020 was a rough quarter for United Airlines, with Revenue down by 87% year-over-year to about $1.5 billion and net losses coming in at about $1.6 billion. While demand has been picking up in recent months (with air passenger traffic in early September almost doubling compared to levels seen in early June) investors need to gauge whether United Airlines has sufficient liquidity to survive a stronger second wave of Coronavirus infections or a prolonged pandemic.

United bolstered its cash position to about $7.5 billion in cash as of June-end, up from around $5 billion at the end of the March quarter, driven by recent debt offerings, and other transactions.  The company’s daily cash burn stood at about $40 million in June, giving it just over 6 months before it runs out of cash. In comparison, Delta, the best-capitalized large airline can survive close to 19 months with its cash holding of about $16 billion and daily cash burn rate of $27 million as of June. [1] American Airlines can survive about 10 months, based on its $10 billion in cash as of June 2020 and a cash burn of about $35 million a day in June.

While United’s cash position as of Q2 appears worse than its rivals, it’s probably not difficult for the company to raise funding in the current environment. United indicated that it had $9 billion of assets that could be used as collateral for future debt raises. Moreover, the company expects cash burn to decline, targeting break-even cash flow during the fourth quarter.

Looking Beyond The Coronavirus

Now, air travel is an essential service that is quite likely to rebound fully as the pandemic subsides, and it’s possible that United should gain considerably. Prior to the pandemic, United posted consistent revenue growth of about 18% between 2016 and 2019, versus about 14% for American Airlines. Its profitability has also been higher compared to some peers, with Operating Margins standing at 8.8% in 2019 compared to just 6.7% for American Airlines. Considering the company’s better fundamentals and the fact that its stock has been hit harder, it’s possible that the stock could see a stronger recovery. Specifically, the stock stands to gain over 120% if it were to recover to pre-Covid levels.

So, United Airlines might give good returns from current levels. But what if instead you are looking for a more balanced portfolio? Here’s a top-quality portfolio to outperform the market, with over 100% return since 2016, versus 55% for the S&P 500, Comprised of companies with strong revenue growth, healthy profits, lots of cash, and low risk, it has outperformed the broader market year after year, consistently.

What to expect for United Airlines Holdings stock, one day after earnings?

United Airlines Holdings During 2008 Recession vs. Now: UAL Stock Has 126% Upside If It Recovers To Pre-Covid Levels