50% Jump In EPS Despite Low Revenue Growth – Here Is How!

Texas Instruments’ net margin increased from 26.9% in 2016 to 34.9% in 2019, implying a 30% bump that added approximately 800 bps. What drove this? First, Cost of Revenue (as % of revenue) decreased from 38.2% to 36.3%. While analog chip manufacturers generally enjoy higher margins compared to companies such as Intel and AMD, Texas Instruments has managed to increase this margin even further – benefiting from industrial and automotive demand and focus on 300 mm wafers which cost less. It doesn’t need to reinvest in newer technologies as frequently as Intel and AMD do, which works in its favor. Second, SG&A (% of revenue) fell from 13% in 2016 to 11.4% in 2019, with a marked drop coming in 2017 and sustaining more or less since then. Third, effective tax rate fell from 27% to just over 12%, primarily due to the enactment of the U.S. Tax Cuts and Jobs Act (the Tax Act). Thus, we believe that all 3 cost improvements are largely sustainable. The crux – Texas instruments has increased its profitability in the past few years, and is likely to sustain it going forward.

Did Investors Reward Increased Margin, Or Was There More To It?

P/E reflects the value that investors place on future earnings potential, and depends on perceived risk and expected growth. The figure for Texas Instruments stood at 24 at the beginning of 2020, a solid 25% above what it was 3 years ago. Much of this expansion came in 2019 despite a sharp revenue decline resulting from weak demand. This demand weakness was already priced in by the end of 2018. Therefore, P/E expansion in 2019 was primarily driven by indications that customer inventory corrections were over and demand was stabilizing.

It is no surprise that Texas Instruments’ stock has taken a beating during the Covid pandemic as all its demand drivers, automotive, industrials and 5G rollout, were affected significantly – fueling another wave of inventory correction.
However, this hasn’t stopped TI from keeping its capacity utilization up and building up inventory, so that it can benefit and gain share as conditions start improving. It had successfully adopted this approach during the 2008 recession.

So Texas Instruments surprised its investors with unexpected return. Is it the only one? No, there are others out there. Here is another semiconductor company that returned 50% to its shareholders with barely any revenue growth 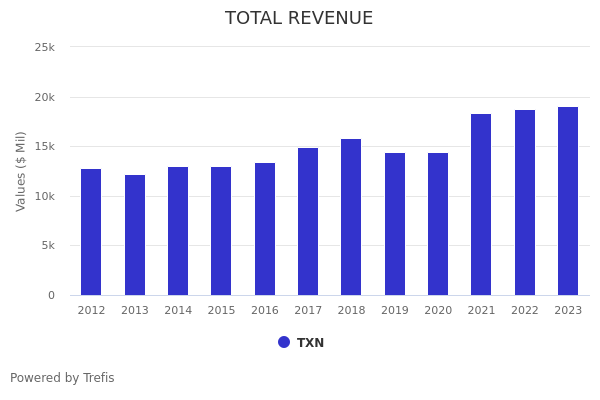