Take-Two Interactive stock (NASDAQ: TTWO) has seen a 15% fall in a month, largely in line with the broader S&P500 index, down 13%. The fall for Take-Two Interactive, in particular, can be attributed to a Grand Theft Auto VI hack. A hacker uploaded 90 videos from a test build of the game online, and Rockstar Studios – the game’s publisher – confirmed the leak to be real. [1] Furthermore, higher inflation means people may spend less on gaming and more on necessities. This factor will likely weigh on the overall gaming industry in the near term. A weakness in broader markets owing to rising interest rates, a strengthening dollar, and fears of a recession isn’t helping either.

Now that TTWO stock has seen a fall of 15% in a month, will it continue its downward trajectory, or is a rise imminent? Going by historical performance, there is a good chance of an increase in TTWO stock over the next month. A move of -15% or more in a month for TTWO has occurred 48 times in the past ten years. Of those instances, 37 resulted in Take-Two Interactive stock rising over the subsequent one-month period (twenty-one trading days). This historical pattern reflects 37 of 48 or a 77% chance of a rise in TTWO stock over the next month. See our analysis of Take-Two Interactive Stock Chance of Rise for more details. 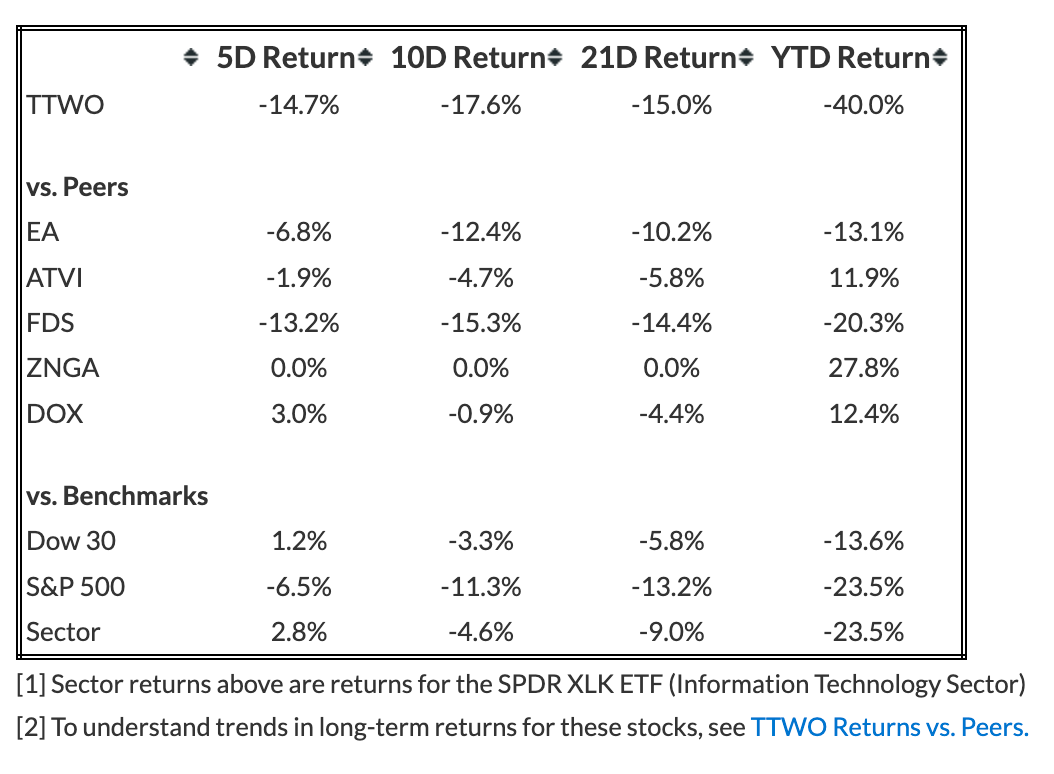 While TTWO stock looks like it can see higher levels, it is helpful to see how Take-Two Interactive’s Peers fare on metrics that matter. You will find other valuable comparisons for companies across industries at Peer Comparisons.

Furthermore, the Covid-19 crisis has created many pricing discontinuities which can offer attractive trading opportunities. For example, you’ll be surprised by how counter-intuitive the stock valuation is for Take-Two Interactive vs. Avago Technologies.

Is There A Better Pick Over 3M Stock?

Should You Buy Teleflex Stock At $225?

What To Expect From Deutsche Bank Stock?

What’s Next For Deere Stock After A Solid Q4?

What’s Next For Baidu After Q3 Earnings Beat?