The price of Take-Two Interactive stock (NASDAQ: TTWO) has seen a fall of over 9% in a month, while it’s down 23% YTD. The company announced its plans to acquire the mobile gaming company – Zynga – in a deal valued at $12.7 billion in January this year. TTWO stock was weighed down, given that the deal reflected a 64% premium to the then market price of ZNGA stock. Take-Two Interactive recently raised $2.7 billion in debt capital to fund the Zynga acquisition. The company had a debt of a little over $200 million last quarter, while its cash in hand was nearly $2.5 billion. The debt levels will rise meaningfully post the Zynga acquisition.

Furthermore, there are some near-term headwinds, including a decline in gaming user engagement levels after the global economies have opened up and people are venturing out of their homes post-pandemic. Zynga itself has been facing pressure due to changes in Apple’s ad tracking policies. That said, we see the Zynga acquisition as a positive for Take-Two Interactive, given its superior gross margins and fast-growing mobile-gaming business.

Now that TTWO has seen a fall of 9% in a month, will it continue its downward trajectory, or is a rise imminent? Going by historical performance, there is a higher chance of a rise in TTWO stock over the next month. Of 250 instances in the last ten years that TTWO stock saw a twenty-one-day fall of 9% or more, 135 resulted in TTWO stock rising over the subsequent one-month period (twenty-one trading days). This historical pattern reflects 135 out of 250, or about a 54% chance of a rise in TTWO stock over the coming month. See our analysis on Take-Two Interactive Stock Chance of Rise for more details.

This pattern suggests a higher chance of a rise in TTWO stock over the next five days, the next ten days, and the next month. 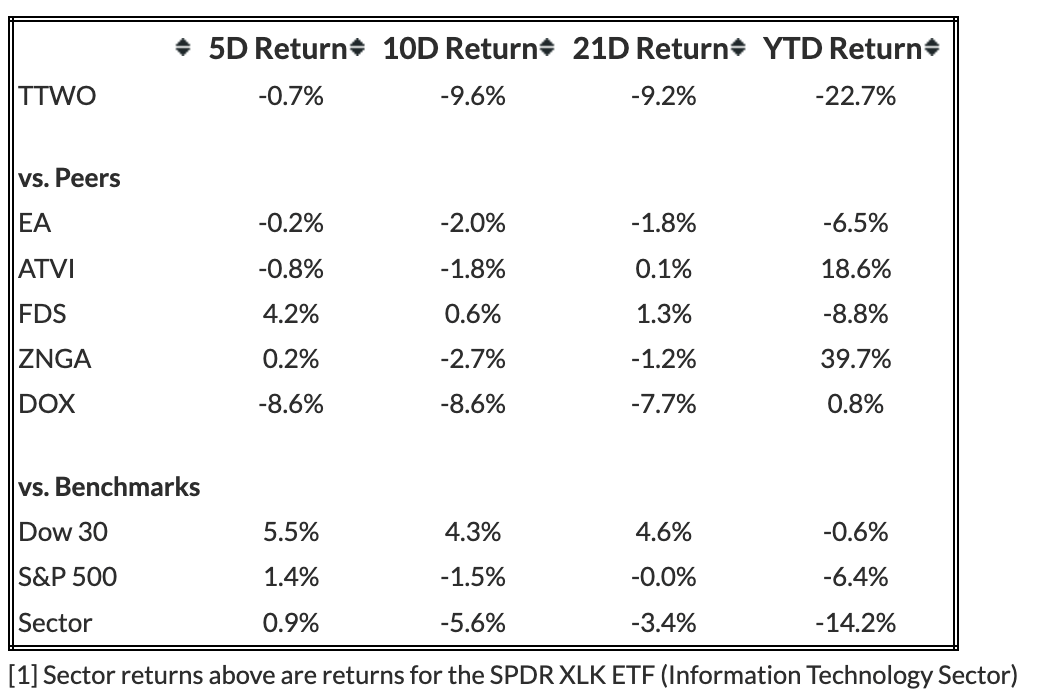 While TTWO stock may see higher levels, the Covid-19 crisis has created many pricing discontinuities, which can offer attractive trading opportunities. For example, you’ll be surprised how counter-intuitive the stock valuation is for Ashland vs. Microsoft.

Why Take-Two Interactive Software Stock Moved: TTWO Stock Has Lost 1% Since 2017 Primarily Due To Unfavorable Change In Price To Sales Multiple (P/S)