Tesla stock (NASDAQ:TSLA) has declined by 18% year-to-date, underperforming the broader S&P 500, which is down by about 9% over the same period. The underperformance comes after a stellar 2021, which saw Tesla stock rise by about 50%.  The recent sell-off is driven by being weighed down by the broader sell-off in high-growth, high-multiple stocks, as investors brace for tighter monetary policy and rising interest rates this year.

Now Tesla’s underlying business actually has a lot going for it. The company has executed remarkably well despite headwinds such as the semiconductor shortage and Covid-19 pandemic, with deliveries rising by about 70% last year and the company posting a stronger than expected set of Q4 2021 earnings. Tesla’s annual vehicle production run-rate stood at over 1.2 million in Q4 2021 and is set to rise further in 2022. There were reports on Monday that Tesla was close to receiving approvals to commence commercial production at its Berlin plant, after months of delays, with an opening ceremony planned for March. This could help the company better cater to the European EV market, which was over 3x as large as the U.S. market in 2021. The current surge in oil prices could also hasten the transition to EVs. Crude oil prices are up by almost 40% over the last three months, to levels of almost $100 per barrel, amid the current war between Russia and Ukraine.

Tesla has also been making a lot of progress on the margins front. Automotive margins rose 648 basis points year-over-year to 30.6% in Q4 2021, driven by soaring volumes for the Model Y and 3 vehicles, which share a common platform and largely utilize similar parts. Tesla, like most other manufacturers, has also been prioritizing the production of more expensive trims of its vehicles over basic models given the strong demand environment.

We value Tesla at about $640 per share translating into a market cap estimate of about $720 billion or almost 2.5x the market cap of Toyota, which is the world’s largest automaker by volume and the second-largest by market value.  However, our price estimate is about 25% below the current market price of $870 per share. With a market cap of approaching $900 billion, Tesla is essentially valued at close to the ten largest automotive companies combined. 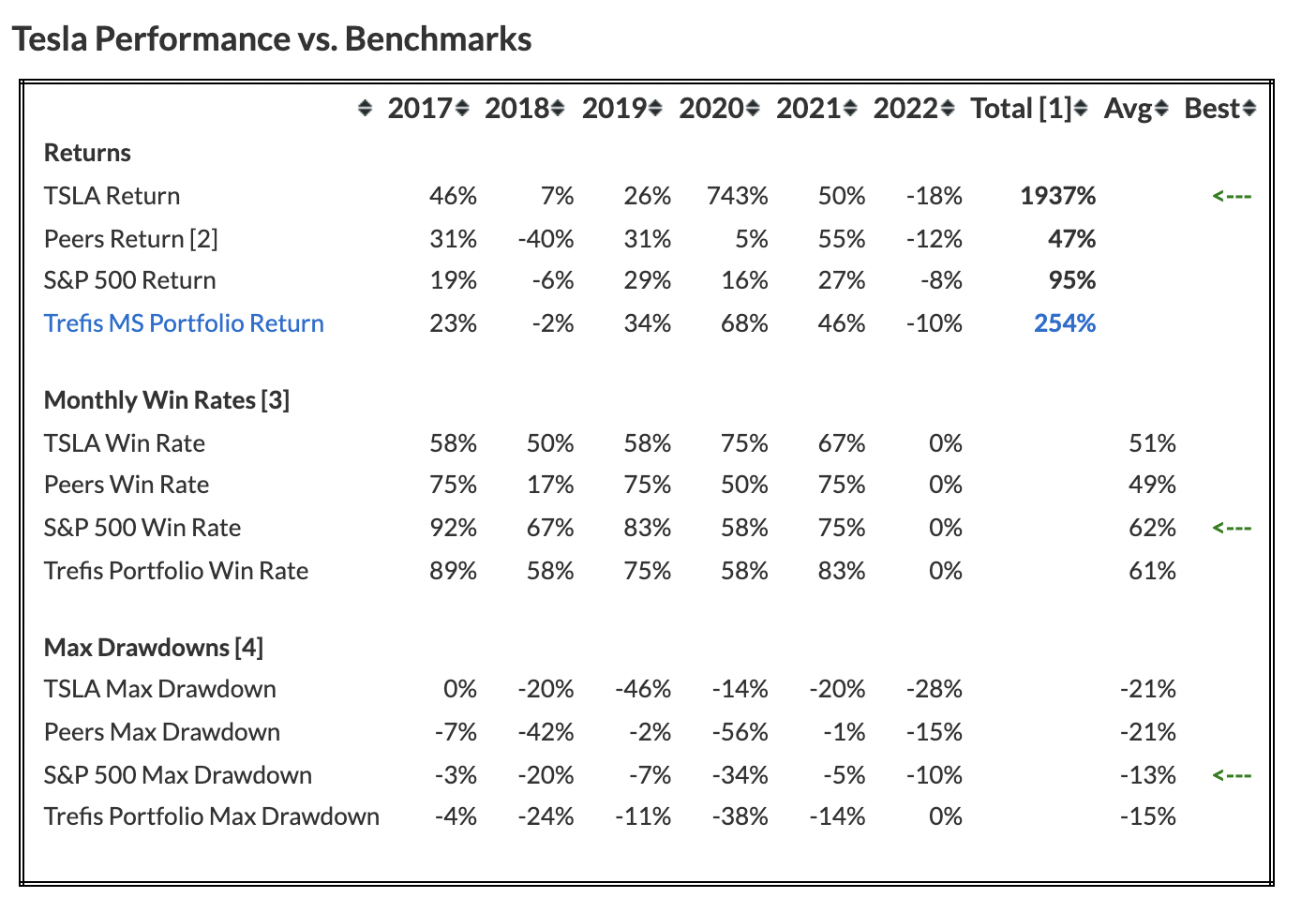 We think this is excessive for a couple of reasons. Firstly, it’s likely that the EV market is going to get a lot more competitive. The barriers to entry aren’t too high, the products are not too complex compared to internal combustion engines, and mainstream automotive companies are investing in building massive scale. For example, VW alone plans to invest about $100 billion toward its EV transition in the next five years. We don’t think that Tesla is going to corner the auto market in the long run, considering that car buyers like variety. If mainstream players eventually deliver compelling EVs that are well-received with customers, it could change the narrative around the auto majors, and potentially hurt the valuation of pure-play EV players such as Tesla. Now Tesla’s full self-driving system is also touted as a big driver of its valuation, given the company’s head start in terms of autonomous miles logged, but this is unlikely to be a winner takes all market, either. Moreover, Tesla appears to be losing some momentum here, as Tesla FSD sales growth is cooling, with fewer Tesla drivers apparently opting for the system when they buy new vehicles.

See our analysis on Tesla Valuation: Is TSLA Stock Expensive Or Cheap? for more details on Tesla’s valuation and how it compares with peers. For more information on Tesla’s business model and revenue trends, check out our dashboard on Tesla Revenue: How TSLA Makes Money.

Here you’ll find our previous coverage of Tesla stock, where you can track our view over time.

What Next For Tesla Stock?