The cost of batteries, which are a key building block of electric vehicles, has declined considerably in recent years. Per Bloomberg New Energy Finance, EV industry average battery prices have declined from an average of around $384 per kilowatt-hour (kWh) in 2015 to about $137 per kWh in 2020, marking an average decline of about 19% each year, with average prices likely to approach the $100 mark by 2023. [1] So how are battery prices benefiting EV bellwether Tesla?

Tesla remains the cost leader in the EV industry, given its higher volumes, better bargaining power with suppliers, and its differentiated battery cells and architecture, and it’s probably safe to assume that the company’s battery costs are about 20% lower than the market average. This would translate into prices of about $110 per kWh of capacity. Assuming the average Tesla has a battery capacity of about 70 kWh, this would mean that battery costs per vehicle stand at around $7,700, down from around $21,000 in 2015. This has been partly responsible for taking Tesla’s gross margins up to levels of around 26% in 2020.

See our interactive analysis A Closer Look At Tesla’s Battery Costs for a detailed look at how Tesla’s battery costs impact its overall cost base.

So will battery cost improvement still be a major driver for Tesla’s improving profitability? It surely will, given Tesla’s ambitions of bolstering its own battery production capacity and even backward integrating into areas such as lithium mining. That said, the impact of battery price reductions is likely to be less pronounced. For example, we estimate that batteries accounted for about 14% of the average selling price of a Tesla vehicle in 2020, down from about 29% in 2015, giving the company a little less room for cost reductions. It’s more likely that things such as self-driving software upgrades, the sales of renewable energy credits, and greater scale via new vehicle manufacturing plants will be bigger drivers of Tesla’s margins.

During its Battery Day event held on Tuesday, Tesla (NASDAQ:TSLA) outlined a host of improvements to its battery technology including the way batteries are designed, manufactured, and integrated into its vehicles. While these enhancements could take about three years to fully materialize, Tesla expects them to help cut the cost per kilowatt-hour of batteries by about 56% per kilowatt-hour.

In many ways, batteries form the foundation of EVs and we estimate that battery costs account for close to 15% of the average selling price of a Tesla vehicle. By cutting costs, Tesla could reduce the starting price of its vehicles and potentially bolster margins on its mid-range and high-end models. Leveraging these improvements, Tesla is targeting the launch of an EV with a $25,000 price tag. As Tesla makes its vehicles more accessible, it could drive volumes and upsell its lucrative autonomous-driving software upgrades.

Tesla is also betting big on manufacturing its own batteries to meet the growing requirements of its automotive and energy storage businesses. The company is targeting 100-gigawatt hours (1 gigawatt-hour is 1 million kilowatt-hours) of internally produced battery capacity by 2022. For perspective, that’s about 3x the battery production capacity that it has at Gigafactory 1, in collaboration with Panasonic. That capacity is likely enough to power over 1.5 million Model 3 vehicles. Tesla wants to scale up to produce a whopping 3,000-gigawatt-hours by 2030. Tesla is also looking at backward integrating its battery operations, with plans to mine for lithium on its own as it secured rights to a 10,000-acre lithium clay deposit in Nevada.

View our interactive analysis on A Detailed Look At How Tesla’s Battery Costs Impact Its Gross Margins. You can also modify assumptions for Tesla’s battery prices and the capacity to view the impact on its margins. 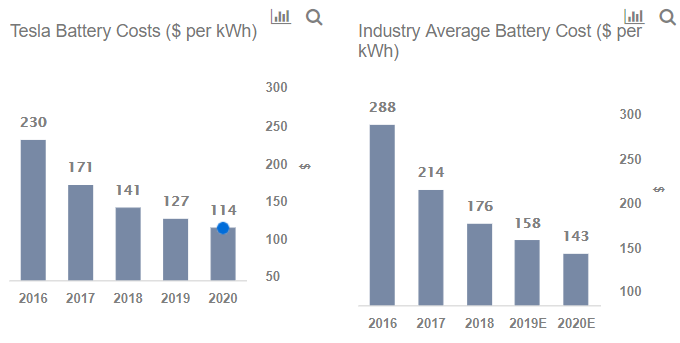 Assuming that the average Tesla vehicle has a 70 kWh battery, this could imply that Tesla’s battery cost per vehicle has declined from $16k in 2016 to about $9k in 2019E

How sensitive are Tesla’s Gross Margins to its Battery Costs

What if you’re looking for a more balanced portfolio instead? Here’s a high-quality portfolio that’s beaten the market since the end of 2016.

After Flat Week, Can Akamai Stock Turn Things Around?