While Tesla stock (NASDAQ: TSLA) underperformed over the first half of 2021, due to the semiconductor shortage, some regulatory issues in China relating to safety, and also due to the broader market rotation from growth stocks to cyclicals, it has picked up nicely over the last few months. The stock remains up by almost 10% over the last month and by over 20% over the last quarter. The stock has also gained about 3% over the last week (five trading days) compared to the S&P 500 which was down by about 1% over the same period. There are a couple of factors driving the recent gains. There has been renewed interest in green energy and the EV space in recent months, with big automakers, including Toyota and Daimler, making big commitments to their EV transitions. This has likely turned attention back to Tesla, which has a sizable lead in the market. Tesla’s automotive business also turned profitable on a standalone basis over the most recent quarter and this is also likely making investors more positive about the company’s earnings prospects in the long run.  Additionally, Tesla’s strong delivery performance in China, as well as multiple analyst upgrades, have also helped the stock.

But now that Tesla stock has seen a 10% move over the last month or so, will it continue its upward trajectory, or is a fall imminent? Going by historical performance, there is a higher chance of a rise in TSLA stock over the next month. Out of 832 instances in the last 10 years that Tesla (TSLA) stock saw a 21-day rise of 10% or more, 535 of them resulted in TSLA stock rising over the subsequent one-month period (21 trading days). This historical pattern reflects 535 out of 832, or about 64% chance of rise in Tesla stock over the next month. See our analysis Tesla Stock Chance Of Rise for more details.

[8/19/2021] How Will Tesla’s Autopilot Investigation Impact Its Stock?

Investors have been betting that Tesla’s (NASDAQ:TSLA) lead in self-driving technology – one of the most powerful trends in the auto market – will help it shape the future of transportation. However, the company’s popular driver-assistance feature, Autopilot, has come under increasing regulatory scrutiny this week, with the National Highway Traffic Safety and Administration (NHTSA) noting that it was looking into 11 cases of collisions of Tesla vehicles with parked vehicles of first responders. Moreover, two U.S. Senators have asked the U.S. Federal Trade Commission to investigate if Tesla’s naming of its driver-assistance systems “Autopilot” and “Full Self-Driving” were deceptive. Tesla stock declined by about 4% over the last three trading days, partly due to the news. So what do the recent developments mean for Tesla’s self-driving ambitions?

While the reported crashes are obviously concerning, safety-related incidents and investigations are part and parcel of the automotive business and we don’t see this as meaningfully altering the course of Tesla’s self-driving business. There is data that indicates that Tesla’s driver assistance systems actually make its cars safer. Tesla publishes vehicle safety reports every quarter, and based on its Q1 2021 data, it said that it registered one accident for every 4.19 million miles driven with Autopilot engaged, compared to one accident for every 2.05 million miles driven without Autopilot, but with the company’s other active safety features. Accident data compared over the last three years, in terms of total miles driven with Autopilot engaged, has also been on the decline. That said, Tesla’s current marketing might appear to make customers think that human oversight of the vehicle may not be necessary and this is probably an area that regulators could likely force the company to make changes to.

Sales of Tesla’s self-driving software appear to be growing nicely, despite increasing news reports of crashes in recent years. Although Tesla doesn’t break out software sales, the company’s automotive gross margins have been trending steadily higher (25.8% in Q2, up from just 18.7% last year) indicating attach rates for software, which is typically very high margin, are likely rising. Moreover, Tesla has also raised prices on the software, to about $10,000 presently from around $5,000 levels in 2019, reflecting the rising demand and capabilities. Tesla has also launched a new $200 subscription to the software and we believe that this could drive adoption further. We should have a lot more details on Tesla’s progress with autonomous driving when the company hosts its first AI Day event on Thursday evening.

We value Tesla stock at about $560 per share, a discount of almost 20% compared to the market price. See our analysis  Tesla Valuation: Is TSLA Stock Expensive Or Cheap? for more details on Tesla’s valuation and how it compares with peers.

Tesla stock (NASDAQ: TSLA) is up over 150% year-to-date, with its market cap crossing $200 billion. Hard to fathom. Why? When you look at a more traditional metric like the number of cars sold, Tesla is tiny – less than 400K cars sold last year, while many of the bigger companies, Honda, GM, Ford, Toyota, each sold over 5 million cars. Correct, Tesla sold a fraction of the cars sold by many of the other car companies and is more valuable than all of them.

It’s partly the improving fundamentals (better than expected Q1 results and Q2 deliveries, strong sales in China), but there has to be more. Investors are likely betting that the disruption caused by Covid-19 could solidify Tesla’s position as the leading electric and autonomous driving play – two separate, and perhaps the most powerful trends in the auto industry. At the same time, there are signs some mainstream automakers are slowing down their investments in the space while they navigate a collapse in sales and manage significant near-term financial pressures.

For instance, BMW and Mercedes-Benz announced that they will end their automated driving alliance, for now, citing current business and economic conditions, among other factors. [1] Here’s the thing: the primary function of cars is to drive. Tesla’s focus on self-driving while some others are either backing out or showing lackluster progress, is akin to a small cereal manufacturer doubling down in the “sweet” category of breakfast cereals, while others say they’ve chosen to back out of it. Can you believe that?

It’s not even close: we lay out the numbers on how big could self-driving be, and contrast with others in our interactive dashboard analysis: Just How Far Ahead Is Tesla In The Self-Driving Race? 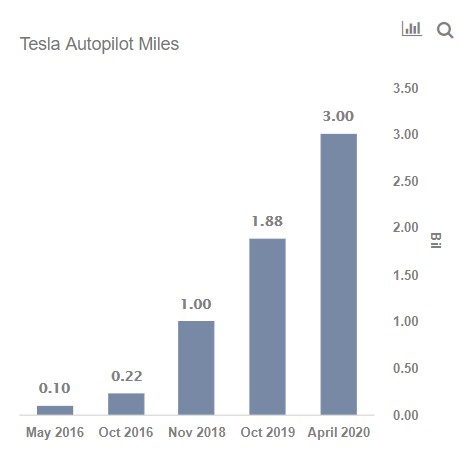 Miles logged are a crucial metric for autonomous cars, as self-driving algorithms are based on machine learning, and more training data makes algorithms smarter. Tesla continues to make solid progress on this front, reporting that its vehicles had logged a total of 3 billion miles on Autopilot as of April 2020 – up from a cumulative 1 billion miles it reported in late 2018. This is well ahead of its nearest rival, Waymo (backed by Alphabet), which reported that its test vehicles had logged 20 million miles on public roads as of January. [2] While Waymo has been “testing”, Tesla is simply doing it! The strategy is simple yet bold: sell cars directly, add self-driving features with a whole bunch of warnings, and collect data while users use it. Shouldn’t Google buy Tesla or perhaps another carmaker and do the same? See how Tesla’s value could rise to $1.5 trillion aided by a deal with Google.

Tesla also appears to be more confident about the capabilities of its system. The company bumped up pricing for its full-self driving software upgrade from $7,000 to $8,000 starting July 1, and CEO Elon Musk has indicated that prices could only keep inching upward going forward as capabilities are added. Tesla is toying with the idea of offering its self-driving software as a subscription service – a move that could boost recurring revenue streams for the company while potentially increasing the adoption of the package.

Is this a good time to jump into Tesla stock? Yes – especially if you believe in this one important Tesla metric: Tesla’s time horizon. On the flip side, for a more balanced, risk-adjusted view see our analysis Tesla Valuation: Jump Into Tesla, Wait, Or Get Out?

Autonomous driving cars have emerged as a hot buzz word in the automotive industry over the last few years, with companies ranging from mainstream automakers such as General Motors to Silicon Valley startups such as Waymo (backed by Alphabet) looking to make a dent in the market. However, electric vehicle pioneer Tesla (NASDAQ: TSLA) appears to have a sizable early lead in this space both in terms of autonomous miles driven as well as monetization of its self-driving technology. Having delivered over 780k vehicles since its inception, most of which come with pre-installed self-driving capabilities that users can unlock by paying for software, the company has developed a meaningful self-driving business. In this analysis, we compare Tesla’s miles logged with rivals and size up the near-term revenue potential for its autonomous driving software. 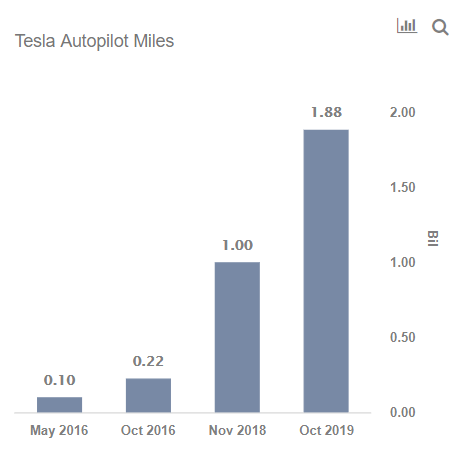 Tesla’s Lead May Be Wider Still, As It Continuously Gathers Data From All Its Vehicles

Tesla Is Likely To Make Over $1.5 Billion This Year From Self-Driving Software Sales

Better Bet Than TSLA Stock: Pay Less Than Tesla To Get More From Sector Peer HPE

Better Bet Than TSLA Stock: Pay Less Than Tesla To Get More From S&P 500 Stock PXD