T-Mobile stock (NASDAQ:TMUS) has had a stellar year so far, rising by 16% year-to-date, compared to the broader S&P which remains down by about 20% over the same period. While wireless carrier stocks, in general, have outperformed this year as investors seek the stability of the sector’s consistent cash flows and lower valuations as the U.S. enters a tighter monetary policy environment, T-Mobile stock has fared much better than rivals such as Verizon (down 3% year-to-date) and AT&T (up 5% year-to-date).  Covid-19 provided a boost to subscriber additions for U.S. wireless carriers, as people increasingly relied on phones and wireless devices through the pandemic.  T-Mobile expects the momentum to hold up this year as well. The carrier’s Q1 2022 results were stronger than expected and it also raised its outlook for 2022 postpaid adds, projecting 5.3 million and 5.8 million net adds, about 300,000 more than before.

Now, although T-Mobile stock does appear expensive versus peers, trading at about 48x consensus 2022 earnings, the markets are pricing in a considerable jump in earnings and cash flows from 2023 onward. While earnings in recent quarters have been impacted by costs relating to the integration of Sprint’s wireless network with T-Mobile’s following their 2020 merger, T-Mobile should benefit meaningfully as synergies from the deal are realized. The decommissioning of Sprint’s legacy network, as well as selling and general expense savings, are expected to help the company realize merger synergies of $5.2 billion to $5.4 billion by the end of this year. Moreover, while Verizon has traditionally been the network to beat in terms of quality of service, T-Mobile is emerging as the network leader of sorts in the 5G era. At the end of 2021, T-Mobile’s 5G network covered 310 million people, of which 210 million are covered by Ultra Capacity 5G, well ahead of AT&T and Verizon, and this wide deployment could help the company with subscriber acquisition particularly outside of urban areas. T-Mobile was also recently named as the best wireless carrier in PCMag’s well-regarded annual mobile network comparison. 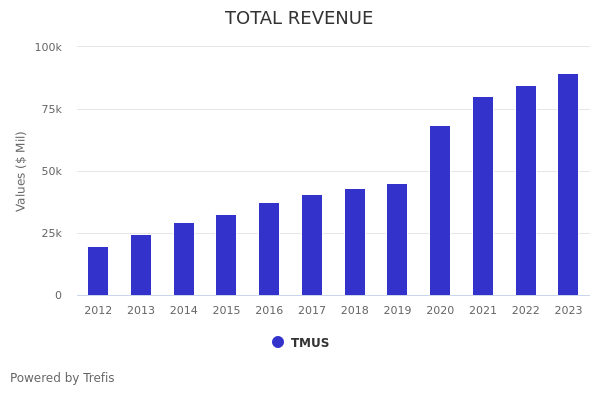