AT&T stock (NYSE: T), which currently trades at $21 per share looks like a good investment opportunity at the moment. The stock remains up by around 12% year-to-date, considerably outperforming the broader S&P 500, which remains down by about 18% over the same period. In fact, the total returns would be stronger if we account for the Discovery (WBD) common stock that shareholders received following the spin-off of AT&T’s WarnerMedia operations. There are a couple of trends driving the stock higher of late. Following the spin-off of the media operations in April, and the hive off of the struggling pay-TV and digital advertising business, AT&T has become a much more focused telecom play, enabling the company to better compete with the likes of T-Mobile and Verizon in the lucrative 5G wireless market. While 2021 was a solid year for the wireless industry, with AT&T adding an average of 1.1 million postpaid subscribers each quarter, the momentum mostly held up this year as well for AT&T. Over Q1 the company added a net 965,000 postpaid subscribers, well ahead of consensus estimates of just about 600,000 adds.  Things should hold up as the company doubles down on the deployment of its recently acquired mid-band spectrum, which offers a better blend of speed and wide coverage. AT&T is also expanding its wireline broadband business with plans to reach about 30 million customer locations by 2025, up from around 17 million presently.

Now, there are some concerns as well. AT&T’s net debt stood at almost $170 billion at the end of March 2022, just prior to the spin-off of WarnerMedia. Even after accounting for approximately $40 billion in cash the company received following the WarnerMedia transaction, AT&T’s long-term debt would stand at over 3x its projected 2022 EBITDA. Moreover, with interest rates also on the rise, AT&T could face some pressure if it seeks to refinance debt. However, AT&T is looking to improve its leverage ratios, via cost reductions targeting 2.5x net debt to EBITDA by the end of 2023. 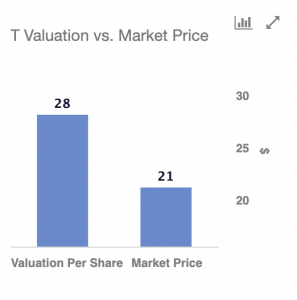 However, we remain bullish on AT&T stock. At current levels of around $21 per share, AT&T stock trades at just about 8x projected 2022 earnings, which is reasonable, considering the steady growth and margin improvement prospects for its core wireless business. We value AT&T stock at about $28 per share, which is roughly 35% ahead of the current market price. See our analysis on AT&T Valuation: Expensive or Cheap for more details on what’s driving our valuation for the company. Also see our analysis on AT&T Revenue: How Does AT&T Make Money, for more details on the company’s key revenue streams and how they have been trending.

How Low Can AT&T Stock Go In A Market Crash?

AT&T During 2008 Recession vs. Now: T Stock Has 85% Upside If It Recovers To Pre-Covid Levels