We believe there may be better places for your money than Synopsys’ stock (NASDAQ: SNPS). SNPS trades at $214 currently and it has gained 53% in value so far this year. It traded at a pre-Covid high of $165 in February, and it is much above that level now. Also, SNPS stock has gained 97% from the low of $108 seen in March 2020, as they saw a boost in the demand for advanced chips due to work from home orders globally. The company saw a revenue growth of 13% in Q3 2020 (ended July 2020) while Net Income more than doubled for the quarter primarily due to better Operating margin and benefit in income tax. In view of the strong rally in SNPS stock since late March, we believe that the stock has little room for growth in the near future. Our conclusion is based on our detailed analysis of Synopsys’ stock performance during the current crisis with that during the 2008 recession in our dashboard analysis.

In contrast, here’s how SNPS and the broader market performed during the 2007/2008 crisis.

Does Synopsys Have A Sufficient Cash Cushion To Meet Its Obligations Through The Coronavirus Crisis?

Synopsys total debt decreased from $205 billion in 2016 to $131 billion at the end of Q3 2020, while its total cash decreased from $1.1 billion to $1 billion over the same period. The company also generated $789 million in cash from its operations in the first nine months of 2020, and it appears to be in a good position to weather the crisis.

Going by the historical performance and in view of the strong rally in Synopsys’ stock since late March, we believe that the stock has little room for growth in the near future. 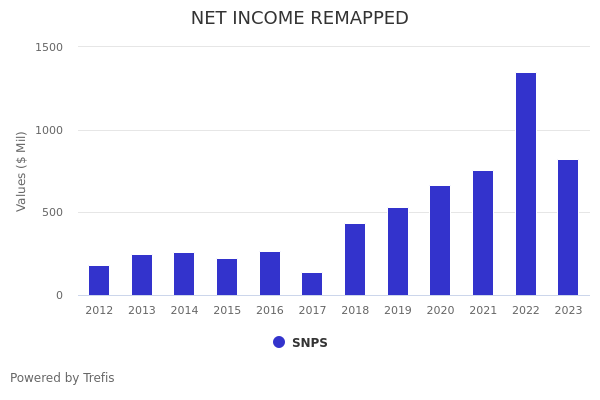 What Drove the 14% Net Income Change for Synopsys in FY2021?

Can PVH Stock Rebound After Falling 15% In A Month?

What To Expect From Guess’ Stock Following Results?

Should You Buy The Dip In Cleveland-Cliffs Stock?

UBS Stock Outperformed The Street Expectations In Q1, What’s Next?

Forecast Of The Day: Average Price of Mercedes-Benz Cars & Vans

What To Watch For Urban Outfitters Stock Past Earnings?