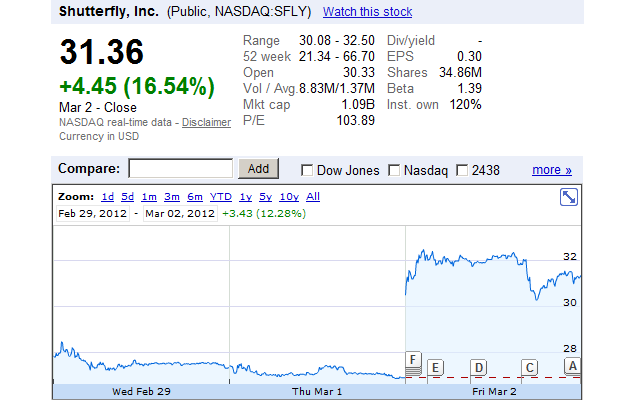 Shutterfly (NASDAQ:SFLY) is primarily an online photo sharing, storage and printing service which enables users to create customized products like photobooks, cards and prints using their images. It competes primarily with services like HP’s (NYSE:HPQ) Snapfish, Kodak’s EasyShare Gallery, American Greetings’ Photoworks and Webshots brands, and even Apple (NASDAQ:AAPL) that ventured into this business lately, with its new Cards app on iOS. However, it has continued to grow its user base through the years, and posted really impressive revenue numbers for 2011.

It recently announced the acquisition of one of its competitors – Kodak Gallery. Kodak recently filed for bankruptcy and has been trying to sell off parts of its businesses in a bid to liquidate its assets. Shutterfly will acquire Kodak’s online photo sharing business – Kodak Gallery – for $23.8 million. ((Shutterfly To Buy Kodak’s Online Photo Sharing Platform For $23.8M, Techcrunch))

Check out our complete coverage of Shutterfly

Kodak is one of the largest players in the online photo sharing business. It has more than 75 million users in the U.S. and Canada. Following the acquisition, all the Kodak Gallery customer accounts and images will be transferred to Shutterfly. Though Kodak has stated that it will give customers the opportunity to opt out of the process, we do not expect many users to opt out.

Shutterfly’s total number of customers increased was around 5.9 million in 2011, and we expected it to grow to more than 6.8 million organically by 2012. However, this new Kodak Gallery acquisition will significantly boost its user base. We will update the Shutterfly model estimates and forecasts to account for the acquisition once it’s complete. For now, you can check out the impact of any increase in Shutterfly’s customer base on its price estimate using this chart:

Shutterfly’s stock price jumped 16% on Friday, following the announcement of the acquisition.

We have a $30 Trefis price estimate for Shutterfly, which stands nearly 10% below its current market price.

Lifetouch Acquisition Should Continue To Drive Growth For Shutterfly

Why Shutterfly Is Worth $57

Lifetouch Acquisition Drives Shutterfly’s 3Q Earnings; New Initiatives To Augment Its Results In The Near Term

Here’s Why We Believe Shutterfly Is Worth $80 Per Share