Currently, Japan is Starbucks’ second largest market with over 1,000 restaurants. The first stage of the tender offer started on September 26, with a purchase price of 965 yen per share (a total of $505 million) for Sazaby’s 39.5% stake. After the completion of this transaction, probably in the first quarter of fiscal 2015, Starbucks will have 79% stake in Starbucks Japan unit. The public shareholders and option holders of Starbucks Japan’s common stock hold the remaining 21% ownership, which will be bought by Starbucks after the settlement of the first tender offer stage for a price of 1,465 yen per share, or a total of about $409 million. [5] All transactions are expected to be completed by June 2015.

We have a $76 price estimate for Starbucks, which is in line with the current market price.

Japan is a lucrative market for coffee companies, as it is the third highest coffee consuming nation in the world after the Unites States and Germany, as of 2013. [6] According to All Japan Coffee Association, the domestic consumption last year hit a record high figure, reaching 446,000 tons approximately. [7] It is also the fourth largest importer of coffee in the world, with an import amount of 400,000 tons annually. Coffee trends have changed in the country, as coffee is no more just a social drink to be consumed in coffee shops, but a regular thirst-quenching beverage.

Japan’s retail coffee market is led by the Swiss food giant, Nestlé (SIX: NESN), with an off-trade value share of 33%. Nestlé’s success in Japan is due to the introduction of canned coffee and regular ‘soluble coffee’ under instant coffee category. Japan’s coffee consumption has soared during the last five years, owing to many factors: 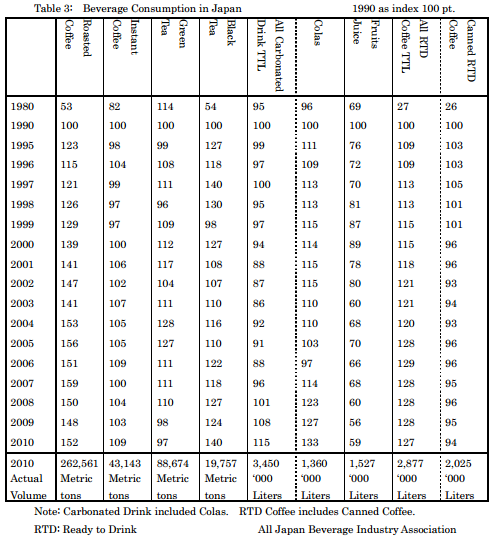 Starbucks mentioned in its 2013 annual report that the company is increasing its dependence on China and Asia-Pacific (CAP) operating segment for revenue growth. The company is aware of the fact that the coffee tastes vary region to region, and that consumers in some Asian countries may not embrace some products which are popular in the western markets such as the U.S.

In fiscal 2013, Starbucks’ CAP segment delivered strong performance in terms of store growth and revenue generation, primarily driven by excellent performance in China and Japan. CAP segment’s revenue increased by 27%, due to 9% increase in comparable store sales and new store growths. The CAP segment has higher relative share of licensed stores than company-operated stores, compared to Americas segment. Although, Starbucks’ store size in Japan, about 1,200 to 1,500 square feet, is similar to its store size in U.S.A., average spend per customer visit is higher in the U.S.A. [8]

In fiscal 2013, the Americas segment contributed 75% to the net revenues. Out of the remaining 25%, the CAP segment accounted for 6% ($917 million). Moreover, by the end of fiscal 2013, there were 3,882 stores in the CAP region, out of which 1,000 were in Japan. Taking an assumption that average revenues per restaurant is same across all the stores in the segment, Japan accounted for 1.6% ($236 million) of the company’s net revenues.

The company has not mentioned about its store growth in Japan. However, with the full ownership of Starbucks Japan, the company has a huge advantage to accelerate new store growth in the country, and increasing its customer base. In 2013, the company added net 35 stores in Japan. Moreover, by the end of the third fiscal quarter of 2014, the company added nearly 400 licensed stores in the CAP region. Taking a proportionate estimate, nearly 40-50 stores would have been added in Japan. With this pace, the total store count in Japan by the end of fiscal 2014 might reach 1,050 approximately. After the company takes full ownership of Starbucks Japan, it might accelerate its expansion and might double its pace of new store growth. With these assumptions, it is probable that the store count in Japan might reach 1,120-1,130 by the end of fiscal 2015. Increased number of outlets might translate to increased number of customers, and might boost the company’s revenue stream.

Starbucks mentioned that the acquisition is aimed at accelerated growth across multiple channels in Japan. The company looks at this deal as an opportunity to expand its product sales through food service channels, to accelerate its retail sales and to provide a boost to its small share of RTD products that are popular in Japan. As mentioned earlier, Canned RTD coffee and regular soluble coffee are extremely popular in Japan. Coca-Cola’s Georgia leads the Japan’s RTD market with a total 22% volume share in 2013. [9] Other major brands include Nestle, Boss coffee, Fire and other regional & house brands.

RTD coffee is a $9.5 billion market in Japan, where it comes in different formats: bottled can, Stay-on-tab (SOT) can, bottled format, chilled cups and paper pack format. More than half the sales of RTD coffee in Japan is through nearly 2.5 million vending machines across the country. ((Japanese RTD coffee market)) This is a great platform for the company to expand its RTD business. Moreover, with a huge brand appeal and marketing strength of Starbucks in Japan, as well as with its premium quality of products, the company might attract large number of customers to try its innovative RTD drinks.

In the latest Q3 report, the company reported its three quarters ended revenues of $820 million for the CAP segment. With this consistent pace, the company might report just over $1 billion in revenues, an increase of 10% year-over-year, for the segment in fiscal 2014. Moreover, Japan is one of the countries, that has the highest prices of retail coffee in the world. [10] Despite the struggling economic conditions in Japan, the margins in Starbucks Japan stores are among the highest in the world, as mentioned by the company in its conference call. Also, coffee accounted for 21% and carbonated drinks accounted for 15% of the $45 billion RTD market in Japan in 2013. Taking all the above factors into account, the revenue growth in fiscal 2015 might jump to 11% for the CAP segment, an increase of $100 million to the net revenues. Starbucks might be looking forward to see how the Japanese customers respond to its RTD products.