Rio Tinto stock (NYSE: RIO) has dropped more than 11% in the last one month and currently trades at $76 per share. The recent drop in the stock has been driven by a sharp decline in global iron ore prices. Iron ore price per dry metric ton dropped almost 35% from more than $220 in July 2021 to less than $145 at the beginning of September 2021, mainly due to lower imports by China following its move to control steel production to meet carbon emission norms. China had asked 20 steel mills in Tangshan city to suspend operations for a week in August in order to reduce emissions as the Chinese steel sector makes up 15% of the country’s total carbon emissions. Also, China’s iron ore imports dropped to 88.51 million metric tons in July 2021 compared to 89.41 million metric tons in June 2021. This was much lower than the 102.1 million metric tons recorded in March 2021. With efforts to control steel production, the demand for the key raw material – iron ore – from China has been hit severely leading to a sharp drop in price levels. However, there has been a slight recovery with Chinese iron ore imports coming in at 97.5 million metric tons in August 2021.

But, after the recent decline, will RIO’s stock continue its downward trajectory over the coming weeks, or is a recovery in the stock more likely? According to the Trefis Machine Learning Engine, which identifies trends in a company’s stock price data for the last ten years, returns for RIO stock average more than 7% in the next three-month (63 trading days) period after experiencing an 11% drop over the previous one-month (21 trading days) period. The stock has more than 70% probability of rising over the next three months. But how would these numbers change if you are interested in holding RIO stock for a shorter or a longer time period? You can test the answer and many other combinations on the Trefis Machine Learning Engine to test RIO stock chances of a rise after a fall and vice versa. You can test the chance of recovery over different time intervals of a quarter, month, or even just one day! 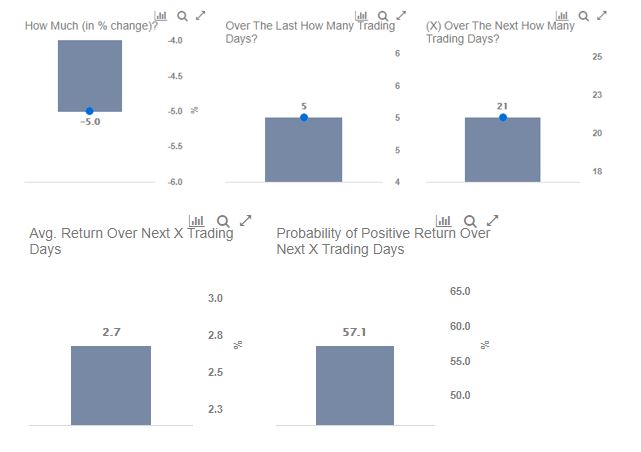 Question 1: Is the average return for Rio Tinto stock higher after a drop?

Is the average return for Rio Tinto stock higher over the subsequent month after Case 1 or Case 2?

Try the Trefis machine learning engine above to see for yourself how Rio Tinto stock is likely to behave after any specific gain or loss over a period.

If you buy and hold Rio Tinto stock, the expectation is over time the near-term fluctuations will cancel out, and the long-term positive trend will favor you – at least if the company is otherwise strong.

For RIO stock, the returns over the next N days after a -5% change over the last five trading days is detailed in the table below, along with the returns for the S&P500:

The average return after a rise is understandably lower than after a fall as detailed in the previous question. Interestingly, though, if a stock has gained over the last few days, you would do better to avoid short-term bets for most stocks.

RIO’s returns over the next N days after a 5% change over the last five trading days is detailed in the table below, along with the returns for the S&P500:

It’s pretty powerful to test the trend for yourself for Rio Tinto stock by changing the inputs in the charts above.

With Iron Ore Prices Under Pressure, What’s Next For Rio Stock?

With Iron Ore Prices Volatile, Is Rio Tinto Stock Worth A Look?

Company Of The Day: Rio Tinto

What Is Ailing Rio Tinto Stock?

Company Of The Day: Rio Tinto

Why Has Rio Tinto Stock Seen Weakness In The Last One Month?