Rig operator Transocean (NYSE:RIG) revealed in its annual filing that it could face up to $473 million in U.S. back taxes for the years 2008 and 2009. [1] The charges are related to transfer pricing charges that the company uses to book revenues among subsidiaries spread across countries. Transocean had earlier managed to clear itself of similar charges made eight years ago. However, the company has now warned that if the U.S. authorities continue to pursue the case against them, its overall tax rate 2009 onward would be substantially higher. Transocean provides offshore drilling services for oilfield companies such as Chevron (NYSE:CVX) and BP (NYSE:BP). We have a $58.59 price estimate for Transocean, which is at a 10% premium to its current market price.Click here for our full analysis of Transcocean.

Multinational companies such as Transocean operate in many countries with varying tax rates. In order to minimize the overall tax burden for the parent company, revenues across divisions can be adjusted to transfer a bulk of the earnings to subsidiaries located in countries with lower tax rates. Transocean, the world’s largest rig operator, shifted from Caymann Islands to landlocked Switzerland in 2008 to benefit from the low tax rates in the country.

Over the past years, the company has reported lower tax rates on its earnings which are included in our corporate expenses for the company. However, if the IRS is successful in pushing its assessment of Tranocean’s earnings, the company’s future tax rates could go up, and it could face expenses related to back taxes as well, loweing our estimates.

Transfer pricing issues are becoming increasingly common among large multinationals and they are especially significant to rig operators because of their global footprint. Two companies owned by Transocean were indicted by authorities in Norway over tax fraud charges in 2011. [1] The company has also faced disputes earlier with the IRS over the tax burden it faces in the U.S. 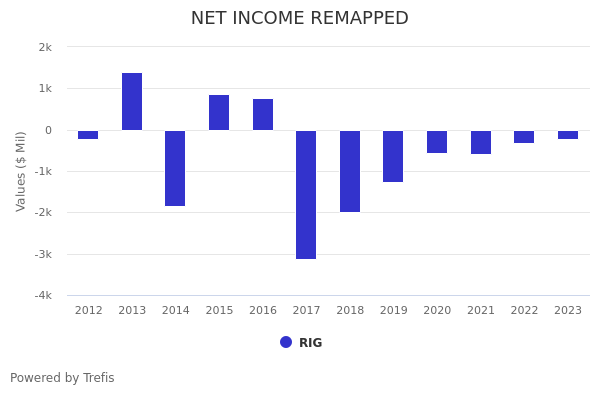 Why Transocean's Free Cash Flow was positive but Net Income was negative in 2021?

Transocean vs. Codexis: With Return Forecast Of 30%, Codexis Is A Better Bet

How Will Transocean Weather The Lull In The Offshore Rig Market?

How Are Transocean’s Key Metrics Expected To Trend?

What To Watch As Transocean Reports Q4 Results

What To Expect As Transocean Reports Earnings

Transocean Is Taking A $520 Million Write-down. Is There More To Come?

What’s The Outlook For Transocean?