Procter & Gamble (NYSE:PG) will announce its Q4 and full-year results on Friday, August 3. The fast-moving consumer goods giant recently lowered its earnings guidance, and expects sales to have dipped 1% to 2% in the quarter ended June 30, in contrast to 1-2% sales growth expected previously. The company has trimmed its profit forecasts thrice this fiscal because of slowing sales growth in Europe and the U.S., rising commodity costs, unfavorable foreign-exchange rates and price reductions, fueling investor pessimism. In contrast, its major competitors like Unilever (NYSE:UL), Kimberly-Clark (NYSE:KMB) and Colgate-Palmolive (NYSE:CL) have performed much better amid similar market challenges.

P&G’s volume growth has been depressed over the past few quarters due to sluggishness in developed markets. It came into trouble after losing market share to competitors in several of its core markets this year. Its attempt to manage high costs through short-term price increases backfired as the competitors did not follow suit, leading to a loss of market share. Sales grew by only 2% last quarter with flat volumes. This was in sharp contrast to Unilever which reported double digit sales growth. This quarter, sales are also expected to suffer, registering over 4% loss due to adverse currency exchange rates as the emerging market currencies posted their biggest declines since 1998.

The company’s operating margins have also suffered a steep decline over the last three years amid high input commodity prices and weak demand in developed markets, causing its stock price to stagnate. With pricing constraints, weak demand in core markets and not much optimism around easing of the commodity cost environment, P&G is now focusing on cutting its costs to improve its margins. It has started executing its massive $10 billion cost-cutting program, which includes $1 billion reduction in marketing costs and $3 billion in overhead expenses, to improve margins. It is also focusing on reclaiming its market share in the top 40 country-product segments that generate more than half of its sales.

P&G’s management has come under increased pressure to speed up restructuring and cost-cuts after activist investor William Ackman’s investment firm Pershing Square Capital Management purchased $1.8 billion worth stake in the company. This has also fueled speculation that P&G might be weighing a possible divestiture of brands like Duracell and Iams to increase shareholder return. The stock has gained more than 6% since the news of Ackman’s stake purchase in P&G surfaced.

We currently have a $66 Trefis price estimate of P&G stock. 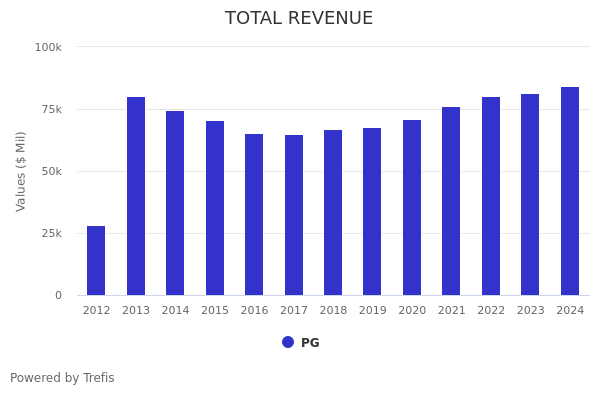 Why Procter & Gamble Stock Moved: PG Stock Has Gained 48% Since 2017 Primarily Due To Favorable Change In Revenues

Despite Steady Gains, Procter & Gamble Stock Has Underperformed The S&P 500 Since 2018

Company Of The Day: Proctor & Gamble

Estee Lauder Stock Is A Good Bet, Even At These Valuations

After 10% Rise In Six Months, Procter & Gamble Stock Running Out Of Juice?

How Equity Investors Can Profit From Surging U.S. Inflation