PepsiCo (NYSE:PEP) has won the lead sponsorship rights for the Indian Premier League (IPL), a cricket tournament which is one of the most popular sporting events in the country. The deal makes PepsiCo the lead sponsor for the next five years, starting April 2013 when the annual tournament begins. The company has splashed out around USD 72 million on the agreement, twice the price paid by the previous five-year sponsor. [1]

Why does it matter?

The growing Indian snacks and beverages market is one of the biggest for PepsiCo in the developing world. The company has quite a lot invested in the country with a range of snacks (Lay’s and Kurkure being the flagship brands) and its usual line of beverages – Pepsi, Mirinda, and Mountain Dew. With so much at stake, the company needs to make sure it keeps its competitors at bay – something it hasn’t done very well in the recent past. Local competitors that are in-tune with local tastes and offer cheaper prices have been eating into the company’s share in the snacks segment.

Coca-Cola (NYSE:KO), the company’s eternal nemesis, has meanwhile been diluting Pepsi’s share in the beverage segment thanks to effective marketing. Facing this rather alarming scenario, the company has decided to go on an all-out promotional offensive. The IPL is one of the most-viewed tournaments in the country, both in terms of stadium audiences as well as TV coverage. This deal will pretty much give Pepsi all the visibility it desires. How effectively it uses this platform, however, remains to be seen.

We will analyze the impact of the deal and other recent news from the world of snacks and beverages in greater depth in the coming week. Meanwhile, stay tuned for more updates on PepsiCo’s exploits in the international arena.

We have a price estimate of $79 for PepsiCo, which is about 15% higher than the current market price. 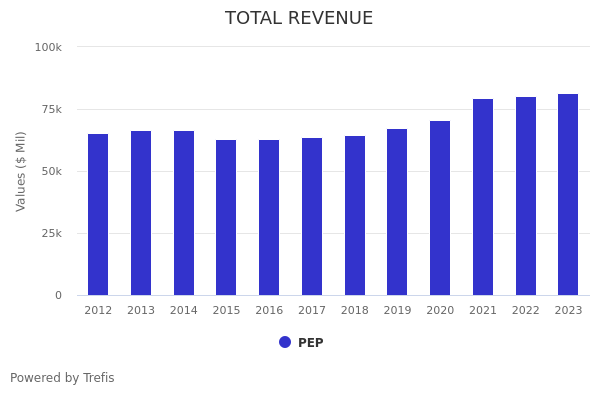 Why PepsiCo Stock Moved: PEP Stock Has Gained 68% Since 2018 Primarily Due To Favorable Change In Revenues

PepsiCo vs. Colgate Palmolive: Neither Seems Like A Good Bet

Is There Any Room For Growth In PepsiCo Stock?

This Vaccine Maker Is A Better Pick Over PepsiCo Stock

With Inflation Surging To 7.9%, These Stocks Are Benefiting

Is PepsiCo Stock Fairly Valued After Its 50% Recovery?

Company Of The Day: PepsiCo