Pandora (NASDAQ: P) recently announced its Q3 results, comfortably beating consensus estimates. Revenues in the quarter came in at about $418 million (+10% year-on-year), while the company reported a loss of 6 cents per share (vs. loss of  11 cents anticipated) on an adjusted basis. The better than expected loss was driven by strong growth of the company’s premium subscriber base and ARPU, coupled with modest growth in advertising revenue. Growth came from both the Subscription segment (+49% y-o-y) as well as Advertising segment (+6% y-o-y). The immense growth in the former is a result of a robust increase in premium subscribers – nearly 800k new paid subscribers added in the quarter – largely due to the new premium family plan. Additionally, Pandora’s multiple partnerships – AT&T, Snap, Comcast, Cheddar, and T-Mobile – should help boost its paying subscribers over the long run and provide a substantial long-term growth opportunity. These various digital partnerships should also help Pandora lower its subscriber acquisition costs and retain subscribers. In addition, the recently passed Music Modernization Act (MMA) – which improves royalty payments – should increase expenses for the company, but could limit damages charged in related lawsuits. 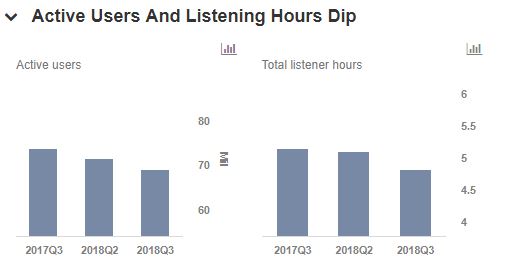 We have updated our model – raising our price estimate for Pandora to $8, which is slightly below the market price, based on the expected growth of its subscribers as a result of the aforementioned partnerships. Note that this price estimate is on a standalone basis and does not account for the proposed acquisition of Pandora by Sirius XM, which has not yet closed. Our interactive dashboard analysis of Pandora’s Outlook For 2018 details our expectations for 2018. You can modify the different driver assumptions, and gauge their impact on the company’s valuation.

Pandora’s Subscription business contributes nearly 30% of the overall revenue and was the fastest growing segment in Q3. The division’s revenue stood at about $126 million for the quarter, which was 49% higher on a y-o-y basis. Much of this was driven by higher ARPU and robust growth in its paid subscriber base, which stood at approximately 6.8 million users (up by 1.6 million on y-o-y basis), largely due to the growth of Pandora Premium. Further, the solid premium subscriber growth in Q3 was mainly due to the first full quarter of the newly introduced family plan pricing. Going forward, we expect a similar trend to continue through the end of the year, driven by multiple partnerships and the launch of its podcast services as well as increased music consumption. Further, the AT&T and Comcast partnerships – which bundle Pandora Premium with AT&T’s Premium plan and Xfinity X1 service respectively – should boost its paid subscriber base and add significant value to the top line in the near term. Additionally, we expect this partnership to provide subscribers with a higher lifetime value as a result of lower churn and lower acquisition costs. In addition, its co-marketing partnership with Cheddar should give Pandora access to a host of young subscribers and drive subscription trials for Pandora. 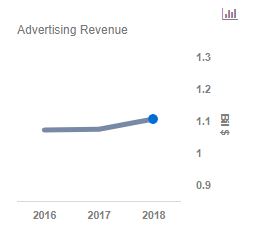 Pandora’s Advertising revenue stood at just under $292 million (+6% y-o-y) driven by an almost 11% y-o-y improvement in ad RPM (revenue per 1,000 listener hours), despite lower ad deliveries and listener levels. The modest growth in the segment was largely due to its acquisition of AdsWizz, newer ad formats, and shift towards higher CPM ad products. Further, we expect the AdsWizz acquisition should improve its advertising capabilities and expand its addressable market. In addition, this should help draw more advertisers to the digital audio space. Additionally, its advertising partnership with SoundCloud should further expand its free subscriber base and provide for decent growth opportunities. Given the fact that audio is the fastest-growing format in digital advertising, this deal makes sense for Pandora.

We expect the positive outlook for Pandora to continue over the coming quarters. driven primarily by the massive growth opportunity in the digital audio market, smart speakers, and increased consumption of podcasts. Consequently, we forecast Pandora’s overall revenue through the year to be around 6% higher on a y-o-y basis at just over $1.5 billion.

The combination of Pandora with Sirius is likely to be highly beneficial to both companies, and should result in the creation of the world’s largest audio entertainment company. However, this deal is anticipated to be completed in the first quarter of 2019, and therefore will not have an impact on the company’s performance in this financial year.

Is A Fall Imminent For Walgreens Stock After An 8% Rise In A Month?
more P coverage
more Consumer Discretionary coverage
more Media coverage

Is SiriusXM Paying The Right Price For Pandora?

How Will Subscriber Growth Drive Pandora In The Second Half Of 2018?

Spotify Has Seen A Big Rally, But Still Faces Some Challenges

How Much Can Pandora Benefit From Snapchat Partnership?

How Did Pandora Perform In Q1?

How Will Pandora Perform In Q1?

What Are Pandora’s Key Sources of Revenue?

For Pandora, Customer Retention Is More Important Than Expansion

Premium Raises Hopes For Pandora, But Bottom Line Continues To Be A Worry