Driven by the growth prospects of the digital audio market, we expect Pandora (NASDAQ: P) to post mid-single-digit revenue growth in 2018, primarily driven by growth in its subscriber base. The company announced its Q4 earnings last week and had a fairly decent 2017, with Q4 results comfortably beating revenue estimates while missing on earnings. Its overall revenue grew by 6% year-on-year to $1.47 billion, while the company’s diluted GAAP earnings per share fell sharply from a loss of $1.49 to a loss of $2.29, primarily due to increased expenses – higher content acquisition costs and impairment charges related to the sale of Ticketfly. Better-than-expected subscriber growth (+25% y-o-y) propelled the 2017 top line, partially offset by ad revenue, which was flat y-0-y as the company exited from Australia and New Zealand. 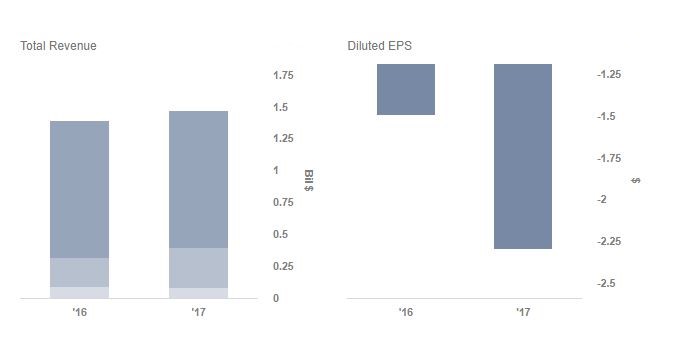 Our price estimate of $5 for Pandora is slightly higher than the current market price. We have created an interactive dashboard where you can change the company’s expected revenue, margins, and other key drivers to gauge how they would impact expected earnings for the year.

Subscription revenue accounts for nearly 22% of Pandora’s revenue and continued to see strong momentum in its top line throughout the year. Revenue from subscriptions grew 40% y-o-y to $316 million in 2017, primarily due to the better-than-expected subscriber and revenue per paying subscriber growth. Paying subscribers grew 25% y-o-y to 5.48 million. The better-than-expected results were primarily due to a 145% y-o-y surge in listening via smart speakers as well as numerous device partnerships with the likes of Comcast, Amazon Fire TV, Sonos, and Android TV in Q4’17. For 2018, Pandora remains optimistic about further expanding its subscriber base driven by including podcast services, more device partnerships, and increased music consumption. We expect the positive outlook for Pandora to continue into 2018, driven primarily by the massive growth opportunity in the digital audio market, smart speakers, and increased consumption of podcasts.

Can Pandora End The Year On A Strong Note After Solid Q3?

Is SiriusXM Paying The Right Price For Pandora?

How Will Subscriber Growth Drive Pandora In The Second Half Of 2018?

Spotify Has Seen A Big Rally, But Still Faces Some Challenges

How Much Can Pandora Benefit From Snapchat Partnership?

How Did Pandora Perform In Q1?

How Will Pandora Perform In Q1?

What Are Pandora’s Key Sources of Revenue?

For Pandora, Customer Retention Is More Important Than Expansion

Premium Raises Hopes For Pandora, But Bottom Line Continues To Be A Worry