The secular decline in the newspaper industry has forced New York Times (NYSE:NYT) to switch its focus into building its digital subscription business. However, the digital push is littered with competition from free news sources such as Huffington Post, Yahoo! news, and other news blogs. Therefore, it is imperative that the recent gains that New York Times has made in digital subscribers be protected, and these subscribers retained, if NYT want’s to remain profitable over the long term.

In this article, we will be discussing the areas that New York Times must focus on if it wants to retain its digital subscribers. Specifically, NYT needs to maintain the quality of its content, invest in a mobile platform, and start an online video news network.

In our opinion, one of New York Times’s key differentiating factors is the quality of the content that it provides. Since the internet will become the primary avenue of news delivery for NYT in the coming years and consumers are spoiled with choice, quality content will be what attracts and retains users. We think that NYT has done a good job of maintaining a high standard of quality, especially in its op-ed section, which with its panel of expert contributors, is a big factor in whether or not an individual purchases a NYT subscription.

However, if NYT is unable to maintain the quality of content on its sites, we are likely to see users end their subscription and switch to other free news sources. For example, we would expect users to switch to sites such as AOL’s (NYSE:AOL) Huffington Post, whose free content is pretty good quality.

Another area which is key for New York Times is the mobile space. Mobile applications such as Flipboard have moved a large amount of news consumption away from traditional newspapers and PCs to mobile phones and tablets. New York Times has been investing in mobile (it released a new iPad app earlier this quarter), but we think that the company will have to continue to innovate on the mobile front so that it doesn’t lose market share on a key platform.

Not only will the mobile platform be key in retaining uses who are on the go, it will also be an avenue via which the company can increase its advertising revenue. If the company can successfully build a mobile platform with generates high traffic, we think that it can be successful in taking a piece of the projected mobile ad spending growth in the United States, which is expected to top $10 billion by 2016. ((US on Track to Become Top Mobile Ad Market, eMarketer))

We think an online news channel like HuffPost Live is an interesting opportunity for NYT, especially since it would diversify the firm’s product suite and give users another reason to subscribe to the newspaper. We also believe that the company’s board of directors, to their credit, realize that New York Times must make a push into the video news business, and have hired a BBC executive, Mark Thompson, to lead the company as CEO.

What strengthens our view on this is the fact that all three major news channels increased their profitability in 2011, during a time which print newspaper revenues and circulation drastically declined. [1] With high speed internet connections becoming more and more affordable, we think that the online video news will play a big part in the news consumption mix. This is why we think that NYT should invest in a news channel since it can not only retain subscribers but can also drive display advertising growth via video based ads.

We currently have a $7.54 price estimate for New York Times, which is approximately 10% below the current market price. 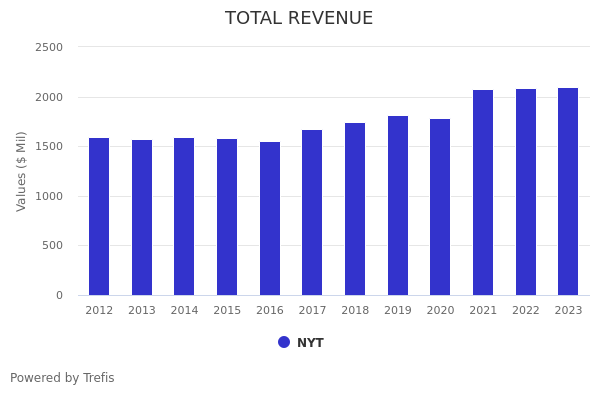