We think that Nutanix Inc. (NASDAQ:NTNX) currently is a better bet compared to NetApp Inc. (NASDAQ:NTAP). NTNX stock trades at 4.3x trailing revenues, higher than that of NTAP, whose P/S multiple stands at 3.3x. Does this gap in the companies’ valuations make sense? We believe it does and we only expect this gap to widen. While Nutanix’s sales weren’t hampered by the pandemic, NetApp saw a drop in sales, and revenue on an LTM basis is still below its FY ’19 level. Nutanix’s revenues have grown from $800 million in FY ’17 (Nutanix’s fiscal year ends in July) to $1.5 billion on an LTM basis. At the same time, NetApp’s sales rose from $5.5 billion in FY ’17 (NetApp’s fiscal year ends in April) to $6.1 billion in FY ’19, before dropping to $5.4 billion in FY ’20. The company’s sales currently stand at $6 billion, still lower than its pre-pandemic FY ’19 levels. For details about NTAP revenues and comparison to peers, see NetApp Inc. (NTAP) Revenue Comparison.

Having said that, we dive deeper into the comparison, which makes Nutanix a better bet than NetApp, especially at these valuations. Let’s step back to look at the fuller picture of the relative valuation of the two companies by looking at detailed historical revenue growth as well as operating income growth and financial position, combined with expected returns. Our dashboard NetApp vs Nutanix: Industry Competitors, But Nutanix Is A Better Bet has more details on this. Parts of the analysis are summarized below.

1. Nutanix Inc. Ahead On Revenue Growth

Additionally, Nutanix’s last three fiscal year sales growth stands at over 6%, much higher than NetApp’s -0.7%, while growth during Covid also stands higher at 5.8%, compared to NTAP’s -11.9%.

Additionally, a look at recent trends reveals that Nutanix witnessed 21% YoY sales growth for its most recent quarter (Q1 ’22), compared to NTAP’s 10.6%. Finally, LTM sales growth for Nutanix stands at 11.8%, more than NTAP’s 9.5%.

NetApp’s LTM EBIT margins currently stand at 20.8%, much higher than Nutanix’s -42.2%, but NTNX is ahead in terms of LTM margin change compared to the last three fiscal years, with 10.9% growth vs NetApp’s 2.3%.

3. Finally, Nutanix Is Ahead In Terms Of Expected Returns

Using P/S as a base, due to high fluctuations in P/E and P/EBIT, we believe Nutanix currently is the better choice. Nutanix’s LTM revenues of $1.5 billion are expected to rise at a CAGR of 6% as per our estimates, taking revenue numbers three years out to $1.7 billion. Assuming Nutanix’s P/S ratio to rise marginally to 4.6x, this means that the market cap would rise to $8 billion, an upside of almost 30% over three years.

In comparison, given historical trends, we expect NetApp’s sales to rise slower at a CAGR of just 1.9%, taking revenue in three years to a little under $6.4 billion. However, considering the P/S for NTAP to pull back to an average level of 2.8x, we estimate the market cap to drop to $18 billion, a downside of 11% from current levels.

While NetApp’s sales stand much higher than that of Nutanix, the latter has seen faster and more consistent revenue growth over the years, but still has negative margins. Having said that, our comparison of the post-Covid recovery above, shows that Nutanix has shown stronger sales growth and margin recovery recently, and we believe profitability will catch up soon enough. Due to this, we believe that Nutanix deserves its higher P/S multiple, and we expect the gap between the two companies’ valuations to increase further. As such, we believe that Nutanix stock is currently a better bet compared to NetApp stock.

Here’s Why NetApp Stock Has Underperformed The Market Since 2018
Visualize Related Companies:
NetApp 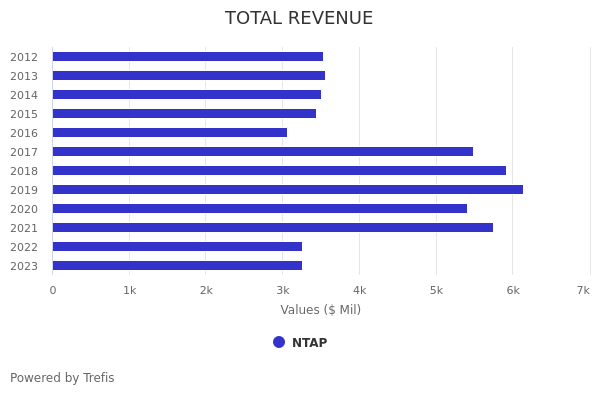 Here’s Why NetApp Stock Has Underperformed The Market Since 2018

What’s Next For NetApp Stock After Shedding 12% In The Past Month?

After Its Recent Underperformance, How Likely Is A Turnaround In NetApp Stock?

Despite 10% Rise In The Past Week, NetApp Stock Still Looks Like A Buy

NetApp Stock Could Drop To As Low As $65

NetApp Stock Could Jump Back Up To Recent Highs

What’s The Upside For NetApp Stock?