The shares of Netflix (NASDAQ: NFLX) currently trade at over $610 per share, which is 75% above its pre-Covid level. On the other hand, shares of Walt Disney (NYSE: DIS) are trading at $150 per share, which is only 9% above its pre-Covid level. Does that make DIS a better stock pick compared to NFLX? Netflix offers streaming services, while Disney is a highly diversified company with offerings in media networks, studio, theme parks, and streaming services. Though the market cap of both companies is very similar, and Disney having a higher revenue base, Netflix still enjoys a much better valuation (P/S) multiple. This is because it is still in the high growth phase. However, we believe that Disney is in a better position to give superior returns in the near future with rapid growth in subscribers of Disney+ and theme parks opening up post-Covid. Advertising revenue is also on an upswing. One of the most important risks Disney faces currently is the uncertainty about the extent of spread and severity of the Omicron variant. We compare a slew of factors such as historical revenue growth, returns, and valuation multiple in an interactive dashboard analysis Netflix vs Walt Disney: Industry Peers, But Walt Disney Is A Better Bet. 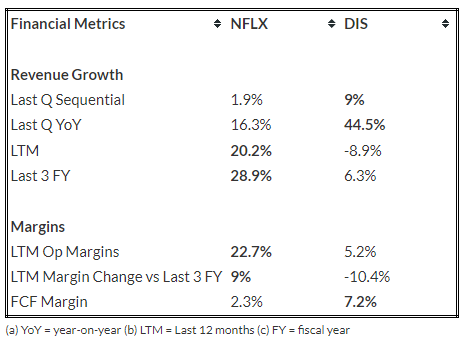 Though Netflix has a much higher revenue growth, margin expansion, and better financial position, we believe that this is mainly because it is in a high growth phase. On the contrary, Disney has lagged mainly because its traditional businesses were severely affected by the pandemic. Netflix stock saw sharp growth in the last one year as the pandemic increased streaming subscribers. However, if we look ahead, Disney stock has a much better growth potential from here. Though it started its streaming offering in late 2019, it boasts of over 118 million subscribers in just two years. To put things in perspective, Netflix achieved a subscriber count of 200 million after a decade of operations; at the current rate Disney is likely to reach that milestone is a much shorter time. Additionally, with economies opening up and theme parks starting to function again, Disney’s traditional business divisions are expected to see recovery in the coming quarters. A major risk that the company faces is that its stock could take a hit if the Omicron variant spreads rapidly across the globe and lockdowns are re-imposed. In the absence of large-scale global lockdowns (like the ones seen in early 2020), Disney’s stock is likely to perform much better than Netflix as its business recovers from the pandemic.

Netflix vs. Large Cap Stocks: Which Is A Better Investment?

Netflix vs. Ad Tech Stocks: Which Is A Better Investment?

Netflix vs. Sports Stocks: Which Is A Better Investment?