Newmont stock (NYSE: NEM) has declined more than 4% in the last one month, underperforming the broader market (S&P 500) which declined less than 1% during the same period. The recent decline in the stock price was driven by a drop in gold prices. Global gold price per ounce has dropped by almost $100 in the last one month, from $1,870/ounce to $1,770/ounce. This was mainly after U.S. President Joe Biden extended Jerome Powell’s tenure for one more term as the U.S. Federal Reserve Chairman. Earlier it was anticipated that Biden might pick Lael Brainard as the Fed chair, who is more dovish than Powell. But the final decision has led to speculation of a faster rise in interest rates, which has strengthened the U.S. dollar and weakened gold prices over recent weeks. With gold contributing more than 90% of Newmont’s revenues, NEM stock has dropped over the last month.

Now, is NEM stock set to drop further or could we expect some recovery? We believe that there is a 53% chance of a rise in NEM stock over the next month (21 trading days) based on our machine learning analysis of trends in the stock price over the last ten years. See our analysis on NEM Stock Chance of Rise. For additional details about how NEM stands in comparison to its peers, see Newmont vs Southern Copper. 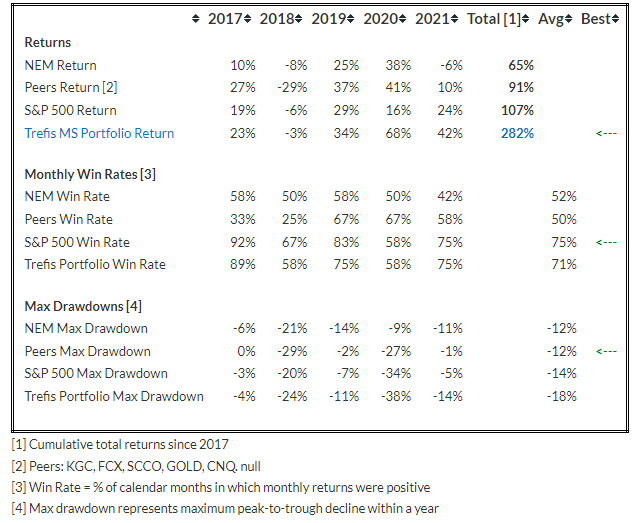 (50% likelihood event; 51% probability of rise over next five days)

Why Has Newmont Stock Outperformed The Market?

How Has The Recent Slide In Gold Prices Affected Newmont Stock?

Why Newmont Stock Dropped In The Last One Month?

Is Newmont Stock A Good Bet With Gold Prices Rising?

What You Should Know About Newmont Stock’s 7% Gain In A Week?

Newmont Stock A Buy After Dropping Over 4% In A Week?

Newmont Stock: Hold On For 25% Gains