After much speculation, Micron Technology (NASDAQ:MU) confirmed early this month that it is engaged in discussions with Elpida Memory to acquire its business.  With $2.4 billion in cash, Micron is in a solid position to bid for the company. Its acquisition of Texas Instruments (NYSE:TXN) DRAM business in 1999 and Toshiba’s DRAM business in 2001, alleviated DRAM oversupply conditions and secured Micron’s sustainable core technological competence. Its acquisition of Elpida could further consolidate the DRAM market, in turn bringing stability in prices and increasing its market share. With a 36% contribution to our price estimate, a rise in the company’s DRAM market share could have a significant positive impact on its valuation.

Elpida, a semiconductor DRAM memory manufacturer, declared bankruptcy due to debts from declining prices, competitive pressure from Samsung (SSNLF) and lower demand on account of floods in Thailand. It filed a petition for commencement of corporate reorganization proceedings with the Tokyo District Court in February 2012. Elpida recently undertook a bidding process to select a company to sponsor it during its corporate reorganization proceedings and to consequently acquire its business. It has finally decided to move forward in negotiations with Micron as a potential sponsor.

Consolidation in the DRAM Market

DRAM manufacturing is highly capital intensive, and as the technology nodes shrink, the costs of setting up a fabrication unit keep getting higher. The business is such that there is no customer loyalty or brand recognition, making it a tough market for smaller players to survive in. The consolidation will help reduce the number of players, making it a more rationale market and probably providing stability from a pricing standpoint, which we assume will steadily decline throughout our forecast period. If Micron’s average DRAM selling price decreases to $0.3 instead of $0.1 predicted by us, we can see as much as a 38% upside to our price estimate

With Elpida, Micron Could See an Increase in its DRAM Market Share

According to research firm IDC, Samsung headed the mobile DRAM market with roughly 52% share in 2011 while Elpida held a 17% share, much higher than the market share accounted for by Micron. [1] In addition to getting hold of Elpida’s market share, Micron will get the added advantage of supplying chips to Apple, which could further boost its holding in the market.  Recently, Apple placed a new order for DRAM chips with Elpida, cutting its reliance on rival Samsung for component supplies. The deal could make Micron the second biggest DRAM memory chips manufacturer for PCs, behind Samsung.

We estimate Micron’s current market share to be around 11% and forecast it to go up to 13% by the end of our forecast period.

If the deal with Elpida successfully goes through, Micron’s market share could go as high as 25% leading to an upside of 35% to our price estimate. You can change the value in the graph above to see how an increase or decrease in Micron’s DRAM market share affects its price estimate.

We have a price estimate of $6.40 for Micron, a premium of around 10% to the current market price. 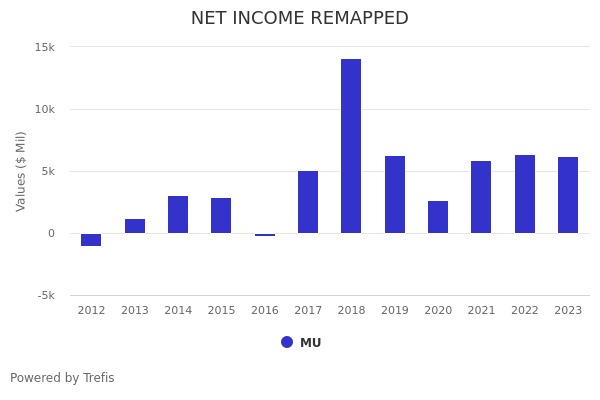 Micron Technology vs. Salesforce: With Return Forecast Of 197%, Salesforce Is A Better Bet

Why Micron Technology's Free Cash Flow was less than Net Income in 2021?

Despite Flat Revenues, Micron Technology Stock Has Doubled Since 2018: Here’s Why

Company Of The Day: Micron

Why Has Micron Technology Stock Returned 2.5x Since 2018 Despite Stagnant Revenue Growth?

Company Of The Day: Micron

After 6% Drop In A Week, What’s Next For Micron Technology Stock?

There’s No Easy Way Out Of The Chip Shortage, But These Stocks Stand To Benefit