Motorola Solutions (NYSE:MSI) announced a mixed set of Q2 2012 results last week. Overall revenues grew 8% year-over-year on a robust 14% growth in the government business, but enterprise played the spoilsport with a 2% decline. While a part of that decline was due to an anticipated drop in the iDEN business, macroeconomic concerns surrounding the European debt crisis as well as a stronger dollar also weighed on enterprise revenues. Strong government revenues however caused Motorola to revise its revenue outlook for the year from approximately 5% to 5-6% y-o-y growth.

In line with the outlook revision, we have a revised $51 price estimate for Motorola’s stock, about 8% ahead of the current market price.

While Q1 and Q2 were very strong for Motorola’s government business with y-o-y growth rates in excess of 10% for both quarters, management gave subdued guidance for the rest of the year. Motorola said that it expects full year growth for government revenues to be in the upper single digits, implying that the back half of the year would be unusually slow. The cautious guidance points to the highly uncertain macro environment with revenues under the constant threat of government budgetary cutbacks if the Euro crisis worsens.

Government spending cuts could have a big impact on Motorola, considering that such revenues account for about two-thirds of its overall sales. However, Motorola’s government customers buy equipment such as two-way radios and other devices that are used in mission-critical public safety situations. The critical nature of public safety causes it to figure high among government priorities; hence its revenues tied to public safety spending have hardly seen any impact so far. In fact, 3% of the 14% growth in government revenues was due to an increase in public safety spending in the U.S. on infrastructure upgrades necessitated by a switch to a more efficient spectrum (narrow-banding) mandated by the FCC. Even in Europe, Motorola’s government business has held up pretty well.

On the other hand, enterprises have proved to be more susceptible to spending cuts across their business verticals. Management said that the enterprise sector is being impacted by the tough macro-economic environment in Europe. This is one of the primary reasons that Motorola now expects enterprise revenues for the year to be relatively flat.

Key growth avenues in the future

Motorola has been focusing on increasing its market share within the enterprise segment through important acquisitions such as Rhomobile last year and the more recently announced Psion. The company has already leveraged its Rhomobile acquisition to launch an application framework targeted at enterprise developers and promote sales of its rugged handheld devices. The Psion purchase will help it expand globally and strengthen its mobile computing portfolio. We see Motorola’s enterprise focus helping it tide over near-term macroeconomic concerns while preparing itself for the high future demand for enterprise mobile computing devices.

As for government revenues, we see the adoption of LTE for public safety along with the broader trend of analog-to-digital shift, not only in the U.S. but also internationally, as the key drivers of Motorola’s value. U.S. public safety spending in the coming years will be bolstered by a job creation bill passed in February that reallocated the D Block spectrum for public safety use and provided a funding of $7 billion to build out a nationwide network over the next 8 years. Motorola is likely to benefit hugely from the higher stickiness of its government customers as well as its strong market position and large installed base of security devices to grab a big chunk of that pie going forward. (see Motorola Solutions to Benefit from Public Safety Broadband Spending) 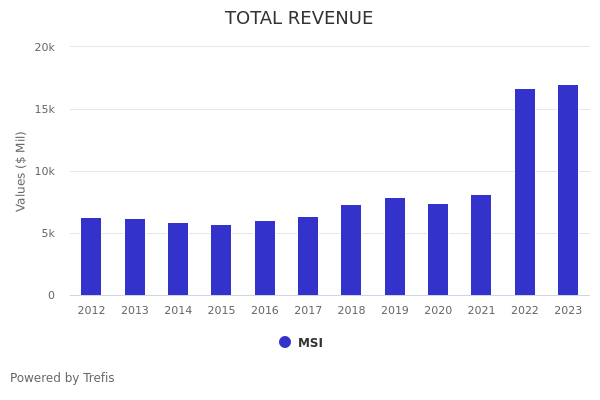 Here’s Why Motorola Solutions Inc. Stock Is Not Your Best Telecommunication Hardware Bet

Forecast Of The Day: Motorola Solutions Software and Services Revenue

Weak Product Demand Could Drag Motorola Solutions Stock Down To $160