Microsoft (NASDAQ:MSFT) officially launched the beta version of the Windows Metro App Store along with the Windows 8 Consumer Preview last week. [1] It currently offers a few apps which will be free until the final launch. The Windows App Store is modeled after mobile app stores like the iOS App Store by Apple (NASDAQ:AAPL) and the Android Market by Google (NASDAQ:GOOG).

Given Apple’s success with the Mac App Store in the desktop space, we expect the Windows App Store to become an even bigger hit as it has a much larger market share than Mac OS X. The Windows App Store will be bundled with Windows 8, the next version of the Windows OS, which is expected to release in mid-2012. We expect Windows 8 to be even more popular than Windows 7, which sold more than 550 million licenses.

One of the main reasons why Apple’s iOS devices have been so successful is the availability of hundreds of thousands of apps for the platform. Apple’s iOS ecosystem currently has more than 500,000 apps, far more than any other mobile platform. It has paid out more than $4 billion to developers, which has made it the most lucrative mobile platform to date, attracting even more developers to create apps, which in turn attracts more consumers to buy its devices. Observing the success of the iOS App Store, Apple also launched the Mac App Store for Mac OS X users. These App Stores not only help Apple sell more devices, but also generate additional revenue for Apple – as it takes a 30% cut from every app sale.

With Windows 8, Microsoft is targeting both the PC and the tablet market. We expect it to be a bigger hit than Windows 7, which has sold around 550 million licenses to date. Microsoft’s new Windows 8 App Store will be the central repository for Windows software and will allow users to access all the available software from a single location. Microsoft has announced that it will be taking 30% of app sales revenue from software sold in the Windows 8 App Store, just like Apple. However, to attract bigger developers, it says that it will take only 20% of the sales revenue for an app, once its revenues reach $25,000. The price range of apps has been set to $1.49 to $999.99.

Given the massive markets – desktops, notebooks and tablets – that Microsoft is targeting with Windows 8, we expect developers to flock to the Windows 8 App Store, developing more apps which attract even more customers. Assuming a user base of 500 million after 2 years of Windows 8 launch, and an average spend of $10 per user on the Windows 8 App Store, Microsoft stands to make around $1 billion from the Windows 8 App Store, even if we assume the minimum cut of 20%. Microsoft’s App Store would also make it easier to deploy software in enterprises and maybe even reduce software piracy by providing users a convenient option to legally buy software from a single repository.

Windows currently accounts for more than 26% of Microsoft’s $38 Trefis price estimate, which stands nearly 15% above its market price. We expect Windows 8 sales to account for a major portion of Microsoft’s revenue growth in the coming years. 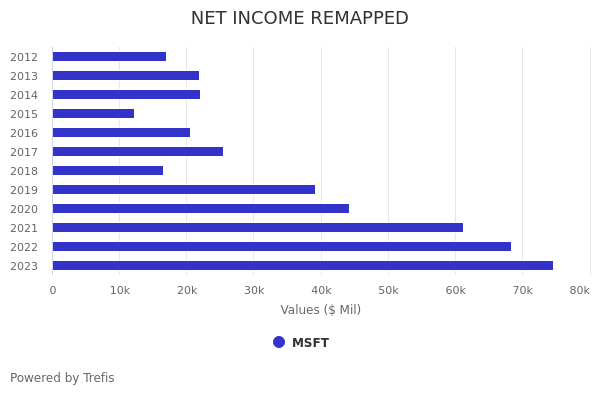