Microsoft (NASDAQ:MSFT) has officially launched the Consumer Preview version of Windows 8 at the Mobile World Congress 2012. It comes with a lot of new features, including touch-based computing, and could be Microsoft’s most important product release yet. [1] It looks like Microsoft may be able to meet its initial projected Windows 8 launch date of around mid-2012, avoiding any rumored delays. Windows 8 will compete with Apple‘s (NASDAQ:AAPL) and Linux based distros in the desktop OS space, and Apple’s iOS and Google‘s (NASDAQ:GOOG) Android in the tablet OS market.

Windows 8: Microsoft’s Most Important Launch Yet

We expect Windows 8 to be a bigger hit than Windows 7, which has sold around 550 million licenses to date. Microsoft has also launched a beta version of the Windows App Store along with Windows 8. It will be the central repository for Windows software, and will allow users to access all available software from a single location. The Windows App Store could become a billion dollar business in its own right, going by the success of Apple’s App Store.

Windows 8 offers a series of new features, and it will target the traditional desktop and notebook market as well as the tablet market. Given that Google’s Android hasn’t yet been able to corner the tablet market, Microsoft’s only real competitor here is Apple, and it should be able to capture a significant amount of market share following the official launch of Windows 8. Windows 8 also comes with Xbox integration and is also integrated with SkyDrive, which is Microsoft’s version of Apple’s iCloud.

Windows accounts for nearly 25% of Microsoft’s $36 Trefis price estimate, which stands nearly 15% above its current market price. It dominates the desktop and notebook OS markets, and we expect it to gain significant market share in the tablet OS market too, in the next couple of years. 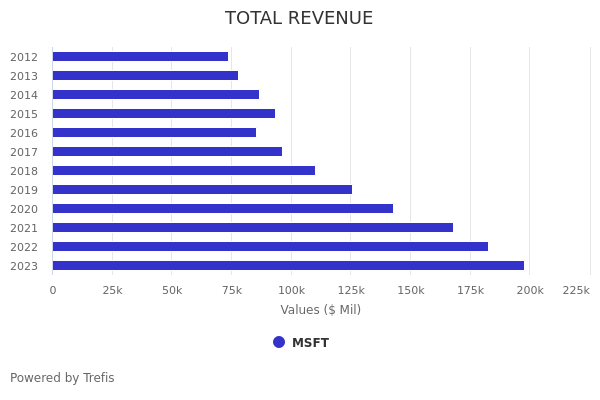 Microsoft vs. Mega Cap Stocks: Which Is A Better Investment?

Microsoft vs. Mid-Cap SaaS Stocks: Which Is A Better Investment?

Microsoft vs. Value Tech Stocks: Which Is A Better Investment?