In the next few years, many blockbuster drugs will lose patent exclusivity, which will result in the loss of over $100 billion in revenues across the pharmaceutical industry. After a drug’s patent expires, generic manufacturers can replicate and sell the product at much cheaper prices, generally leading to a steep decline in the drug’s revenues. We have recently begun taking a look at the prospects of major divisions of pharma companies under our coverage following the patent cliff (Read Pfizer Patent Cliff: A Look At The Cardiovascular Drugs Division). Below we discuss the prospects of Merck‘s (NYSE:MRK) Anti-Infectives division, which will see one of its highest-selling drugs, Nasonex, losing patent protection in 2014.

Our price estimate for Merck stands at $43, about in line with the current market price.

See our complete analysis for Merck

Anti-infectives are substances that counteract infection and include antivirals, antibacterial and vaccines. Merck has a well-diversified portfolio in this segment, with well known brands including Nasonex, Claritin, Isentress, Gardasil and Crixivan. The division generated more than $10 billion in sales in 2011.

Among the drugs that are set to lose patent protection in the next 2-3 years, Nasonex, an inhaled nasal treatment for nasal allergy symptoms, contributes the most to the division’s revenues. Revenues from Nasonex topped $1.3 billion in 2011, which could see a steep decline after its patent expiry in the U.S. in 2014. Other such drugs include Crixivan (2012), Cancidas (2013) and Invanz (2016). These drugs collectively generated more than $1.1 billion of sales in 2011. The expiry of these patents will have a significant impact on the division’s revenues in the near-term, as close to 20% of the division’s overall sales is at stake. Further, patent expiry generally leads to a decline in margins as cheap generic versions put pressure on the company’s pricing power. However, we believe that the growth potential in the some of the company’s other drugs douse concerns arising from the patent cliff.

Worldwide sales of Isentress, a treatment for HIV-1 infection, continue to exhibit strong growth in the United States as well as internationally. Further, Gardasil, an HPV vaccine, is also seeing a continued uptake in its demand and the vaccine is gaining popularity. For example, since September 2012, Gardasil is being used in the HPV vaccination program to protect girls from cervical cancer across schools in the UK, according to the UK Department of Health. This reflects a switch from GlaxoSmithKline’s Cervarix.

However, the drug that we believe holds the most promise is Victrelis (boceprevir). Victrelis is a new class of antiviral drug to treat the Hepatitis C virus (HCV). The drug received U.S. FDA and European approval last year, and we expect the drug to contribute nearly $1 billion in revenues in the next few years. There is a large unmet demand in the HCV market as almost 8 million people worldwide were estimated to have chronic Hepatitis C in 2011. [1]

While the drug has not seen as strong an uptake as its largest competitor, Vertex’s Incivek, we expect the drug to eventually catch up as Victrelis is used over a longer period of time than Incivek and therefore takes longer to realize revenues from an individual patient. However, the potential launch of interferon free drugs (expected to become the key treatment in the future) in 2014-15 could hurt sales afterwards. 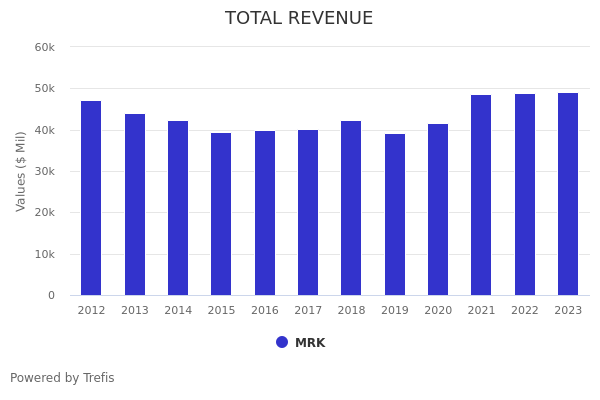 Better Bet Than MRK Stock: Pay Less Than Merck To Get More From Stock WEX

Is A Fall Imminent For Merck Stock After A 12% Rise In A Month?

Will Merck Stock Rise After Its Q3 Results?

Merck Stock Is Likely A Better Pick Over Its Peer

Is Humira Maker A Better Bet Over Merck Stock?

Should You Buy Merck Stock After An Upbeat Q2?

Will Merck Stock Rise After Its Q2 Results?

Is There A Better Pick Over Merck Stock In Animal Health Space?

Will Merck Stock Rise After Its Q1 Results?

What’s Next For Merck Stock After A 6% Fall In A Month?

Will Merck Stock Rise After Its Q4 Results?