McDonald’s Corporation (NYSE:MCD), whose shares have fallen more than 15% since its highs of $102, is realigning its strategy in order to boost the flagging sales. The company had shifted its focus from Dollar meals to Extra Value meals due to higher margins associated with the latter. However, the recent slump in same-store sales has forced the restaurant chain to rethink its strategy of focusing on Extra Value meals. McDonald’s same-store sales turned negative for the first time in nine years in October. With the global economy in a precarious state and the consumer confidence still weak, McDonald’s has decided to up its focus on the Dollar Meals once again.

Starting from late 2012 or early 2013, two new menu items, Snack Size Fish McBites and the Grilled Onion Cheddar Burger, will debut on the Dollar Menu. [1] Moreover, McDouble is already being offered for $1 since September and restaurants across the country will also continue to offer soft drinks and premium roast coffee for $1.

The concept of offering meals which give customers a greater value for money does not end domestically. Internationally too, the restaurant chain has upped its game on the value meals. In Japan, the company has a 100 Yen menu as part of its value offerings. In Australia, McDonald’s has been trying to increase its guest count through the Loose Change menu and in France, Petit Plaisir, the smaller sandwiches priced at 2 euros, will be extended nationwide.

Besides the Dollar Menu, introducing new menu items has always been a part of McDonald’s strategy to attract greater customer footfalls. The fast food chain will debut three new varieties of Quarter Pounders soon. It also plans to launch McMuffin made of egg whites in January next year as well as reintroduce the mackerel sandwich and the McRib shortly. [2] Restaurant chains are also looking at unconventional ways such as selling packaged coffee and K-cups at their stores in order to improve their sales.

We have a $93.6 price estimate for McDonald’s, which is about 10% higher than the current market price. 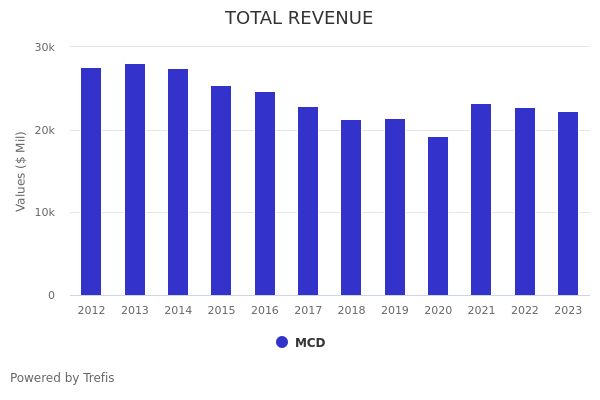 Better Bet Than MCD Stock: Pay Less Than McDonald's To Get More From Industry Peer DRI

McDonald’s Q3 Earnings: What Are We Watching?

What To Expect From McDonald’s Stock?

This Restaurant Stock Is Holding Up Despite Rising Inflation. Is It Still A Buy?