MasterCard’s (NYSE:MA) operations in Europe faced a big setback this week as the European Union’s General Court ruled against the company’s challenge to overturn an earlier decision regarding the cross-border fees charged by the company. [1] Cross-Border fees are charged by MasterCard on international transactions. The court however, ruled that fees charged were inflated and unfair to both retailers and customers. MasterCard, along with competitors Visa (NYSE:V) are expected to contact the authorities to understand the rules for compliance with the ruling.

Although MasterCard has announced its intention to appeal to the European Union’s highest authority, The European Court of Justice, the company has agreed to maintain fees of 0.3% of the transaction amount for credit card and 0.2% for debit card transactions. International Fees account for 27% of our price estimate for MasterCard.

The decision comes just a few months after the Durbin Amendment to the Dodd-Frank financial overhaul bill, which went into effect on October 1, 2011, limiting the interchange fees to 21 cents per transaction in the U.S. and we also expect it to have an effect on other court cases and inquiries regarding domestic interchange fees charged by credit card companies. The General Court ruled that multilateral interchange fees were not required for streamlined operation of the transaction system, which would bring local governments into play while deciding interchange fees for banks. We expect transaction fees to drop in the near future.

This summer, two major sports events take place in Europe: the summer Olympics in London and the UEFA Euros in Poland and Ukraine. (See Visa Expects Mobile Payments Surge At Olympics) We expect international transaction volumes to rise as these games will attract a large number of sports fanatics from around the world, leading to increased tourism and merchandise sales. The growing popularity of mobile phone payments will allow customers greater convenience while making transactions on the go, promoting sports enthusiasts to spend more without the burden of carrying cash or traveler’s checks.

Our price estimate for MasterCard is $417, which is in line with the market price 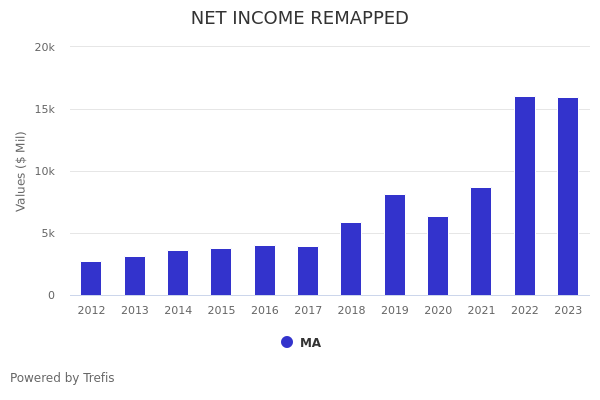 Mastercard vs. Visa: With Return Forecast Of 42%, Mastercard Is A Better Bet

Why Mastercard's Free Cash Flow was more than Net Income in 2021?

Why Mastercard Stock Moved: MA Stock Has Gained 74% Since 2018 Primarily Due To Favorable Change In Revenues

Fintech Stocks Have Tumbled. What Next?

Mastercard Stock To Top The Consensus In Q1?

Forecast Of The Day: MasterCard’s Payment Volume Per Card

Mastercard Stock To Miss The Earnings Consensus In Q4?

Mastercard Stock Has Lost 7% In A Week, What’s Next?

Mastercard Stock To Edge Past The Street Expectations In Q3?

Is PayPal Stock A Better Choice Than Mastercard Stock?

Mastercard Stock To Top The Street Expectations In Q2?

Forecast Of The Day: Mastercard’s Payment Volume Per Card