The shares of Southwest Airlines (NYSE: LUV) are trading 30% below pre-Covid levels despite stable passenger numbers at TSA checkpoints, largely due to the anticipation of a near-term decline in air travel demand. However, investors have been optimistic on Hyatt Hotels stock (NYSE: H), a hotel company with a strong domestic presence. This year, Hyatt Hotels stock has gained 14% assisted by a revival in leisure travel and subsequent improvement in system-wide room occupancy rates. While both companies belong to different industries, domestic travel demand is the key macroeconomic factor driving their top line. Given Hyatt’s lower profitability and weaker balance sheet as compared to Southwest Airlines, Trefis believes that Southwest stock is poised for strong gains. Does the optimism in Hyatt stock indicate an upcoming surge in air travel? We compare the historical trends in revenues, margins, and valuation multiple of both companies in an interactive dashboard analysis, Southwest Airlines vs. Hyatt Hotels – parts of which are highlighted below.

From the perspective of financial leverage, Hyatt Hotels is the riskier bet of the two companies.

While it makes sense that travel demand would rebound and Southwest would benefit, a new risk is that the Omicron variant may put up a roadblock to increased travel, or at least delay the timeline to recovery. 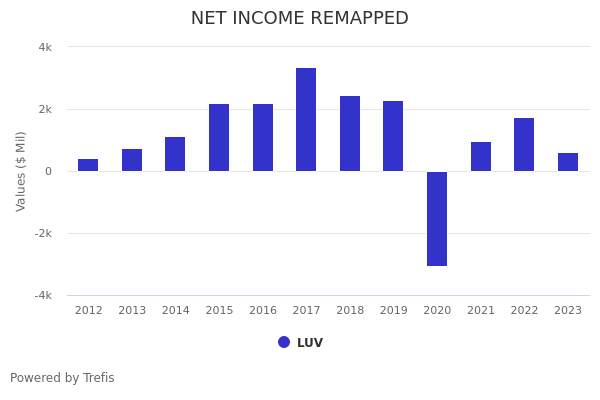 Will Southwest Airlines Stock Gain Momentum In The Near-Term?

Is There A Better Pick Over Southwest Airlines Stock Ahead Of Earnings?

Southwest Airlines Stock: Buy The Dip As It Comes