LinkedIn’s (NYSE:LNKD) stock opened at $83 after its IPO was priced at $45 and reached an intra-day high of around $123 on the first day. And then a month of carnage started which saw the stock plummeting by 51% from its all-time high. Even though the stock has impressively recovered, climbing almost 75% from its June 20 lows of $60, we remain fundamentally bearish on LinkedIn.

Our valuation is in line with the company’s earlier IPO guidance and slightly higher than the implied valuations at which LinkedIn traded previously on services such as SharePost and SecondMarket.  Below, we highlight the key factors driving the Trefis price estimate for LinkedIn of $30. [1]  We also highlight how the run up in LinkedIn’s stock that has occurred in late June and early July is primarily driven by positive coverage from banks as well as compare how the Trefis revenue estimates for LinkedIn compare to consensus.

LinkedIn competes with Monster (NYSE:MWW) in the recruitment services market, as well as social networking portals like Facebook and Twitter. The company also faces competition from Google (NASDAQ:GOOG) and Yahoo (NASDAQ:YHOO) in the online advertising market.

Our $3.2 billion valuation for LinkedIn breaks-up roughly as follows:

Towards the end of June, banks such as Bank of America and J.P. Morgan released positive initiating coverage of LinkedIn with price targets of $92 and $85, respectively. [3] This helped continue LinkedIn’s rally, even though the stock price has now crossed the price targets set by these banks.  It’s unclear what fundamental forecasts the banks are so bullish on that justifies their price estimates.  As we’ve highlighted above, we’re pretty bullish on LinkedIn’s key business drivers as well, yet the resulting valuation doesn’t justify the current stock price.

Comparison of Trefis and Consensus Revenue Forecasts for LinkedIn 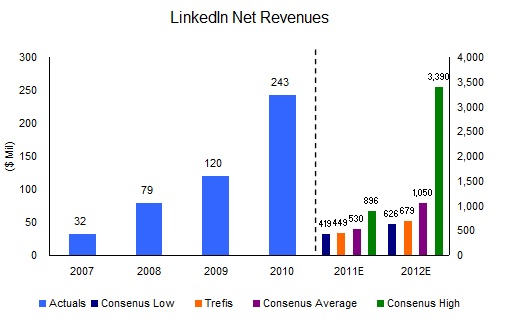 The highest estimates factored into consensus show nearly $900 million in 2011 revenues for LinkedIn and about $3.4 billion in 2012.  The average consensus figures (shown above in purple) are based on a total of 8 analyst estimates and do not include the Trefis estimates.

Overall, LinkedIn will have to maintain the significant fees it charges to corporate and business customers while growing its corporate and business customer base significantly from a few thousand customers today to tens of thousands over the next few years. At the same time, LinkedIn will need to maintain or grow its job post pricing in the face of competition from a variety of sources (Monster, Careerbuilder, TheLadders, Dice).

Continuing to grow the LinkedIn member base, increasing the amount of information that LinkedIn members share and the freshness of that information will be crucial to maintaining demand from recruiters and business for LinkedIn’s services. By having the most comprehensive and up to date information on active and passive job candidates, LinkedIn will position itself to be a destination site for recruiters looking for highly effective, targeted job postings and advertisements.

See additional driver breakdowns in our full analysis for LinkedIn.

What To Expect From LinkedIn’s Q3 Earnings

LinkedIn’s Next Move To Increase Its User Base In India

Why Is LinkedIn Focusing On India?

Here’s How LinkedIn Can Benefit From Expanding Pro-Finder?

Why Videos Can Increase User Engagement on LinkedIn?

What To Expect From LinkedIn’s Q2 Earnings

Here’s How LinkedIn Is Strengthening Its Sales Offering

How Will Microsoft Benefit From LinkedIn’s Enterprise Relationships?