Coca-Cola stock (NYSE: KO) decreased almost 7% in the last one week and currently trades at $51 per share. The drop was driven by the recent spike in Covid-positive cases and a new strain leading to lockdowns in the UK, which has led to expectations of the impact of the pandemic lasting longer than earlier projections. This will possibly affect Coca-Cola’s sales which is largely dependent of away-from-home consumption like bars, movie theaters, live sports, etc. Extended lockdowns or new ones will take a toll on the company’s sales which has led to analysts downgrading Coca-Cola’s stock price estimate in the last few days.

According to the Trefis Machine Learning Engine, which identifies trends in a company’s stock price data for the last 20 years, returns for Coca-Cola stock average close to -2% in the next one-month (21 trading days) period after experiencing a 7% drop over the previous one-week (5 trading days) period. Notably, though, the stock is likely to underperform the S&P500 over the next one month (21 trading days), with an expected excess return of –2% compared to the S&P500.

But how would these numbers change if you are interested in holding Coca-Cola stock for a shorter or a longer time period? You can test the answer and many other combinations on the Trefis Machine Learning to test Coca-Cola stock chances of a rise after a fall and vice-versa. You can test the chance of recovery over different time intervals of a quarter, month, or even just 1 day! 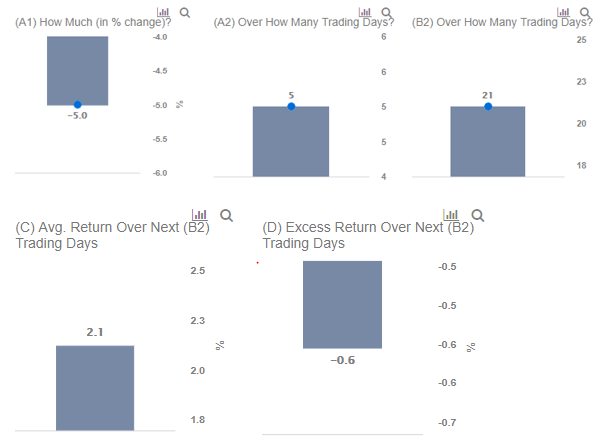 Question 1: Is the average return for The Coca-Cola Company stock higher after a drop?

Case 1: The Coca-Cola Company stock drops by -5% or more in a week

Case 2: The Coca-Cola Company stock rises by 5% or more in a week

Is the average return for The Coca-Cola Company stock higher over the subsequent month after Case 1 or Case 2?

Try the Trefis machine learning engine above to see for yourself how The Coca-Cola Company stock is likely to behave after any specific gain or loss over a period.

If you buy and hold The Coca-Cola Company stock, the expectation is over time the near term fluctuations will cancel out, and the long-term positive trend will favor you – at least if the company is otherwise strong.

Overall, according to data and the Trefis machine learning engine’s calculations, patience absolutely pays for most stocks!

For KO stock, the returns over the next N days after a -5% change over the last 5 trading days is detailed in the table below, along with the returns for the S&P500:

KO’s returns over the next N days after a +5% change over the last 5 trading days is detailed in the table below, along with the returns for the S&P500:

It’s pretty powerful to test the trend for yourself for The Coca-Cola Company stock by changing the inputs in the charts above. As per Trefis, Coca-Cola’s valuation works out to $55 per share.

Better Bet Than KO Stock: Pay Less Than The Coca-Cola Company To Get More From Industry Peers KDP, COKE

How Low Can The Coca-Cola Company Stock Go In A Market Crash?

Coca-Cola: A Stock That Rallied More Than 4% In A Week

What’s Next For Coca-Cola Stock After Its 6% Rally?