Despite almost a 30% rise since the March 23 lows of this year, at the current price of around $48 per share, we believe Coca-Cola stock (NYSE: KO) has some upside left. KO stock has increased from $37 to $48 off the recent bottom, less than the S&P which increased by 46% from its recent bottom. Even though the stock is around 8% above the level at which it was at the end of 2018, it is still lower than its pre-Covid (February 2020) high of $60. We believe that KO’s stock could rise by about 5% from its current level, driven by expectations of rising demand and easing of supply constraints following the gradual lifting of lockdowns and benefits from recent acquisitions. Our dashboard What Factors Drove 7.5% Change In Coca-Cola Stock Between 2018 And Now? has the underlying numbers. 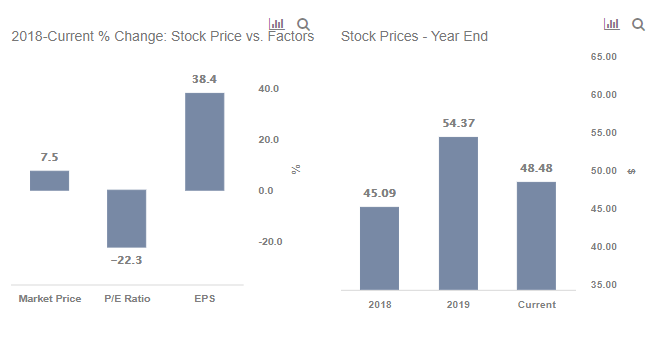 Some of the stock price rise between 2018-2019 is justified by the roughly 8.6% growth seen in Coca-Cola’s revenues during this period. The effect of which was further accentuated by a sharp rise of 28% in profitability as net income margins increased from 18.9% in 2018 to 24.1% in 2019. Margins saw an improvement in 2018 and 2019 as the company benefited from refranchising (franchise owners record revenues from bottling plants they own, while Coca-Cola earns fees from franchisees) of its bottling plants, which is a low-margin business. On a per share basis earnings increased from $1.51 in 2018 to $2.09 in 2019.

Coca-Cola’s P/E multiple dropped from 30x at the end of 2018 to 26x by the end of 2019 mainly due to growth in EPS, which was coupled with a slower growth in the stock price. However, the P/E multiple dropped further in the initial few months of 2020 only to recover over the recent weeks, and now stands at 23x. We believe that the company’s P/E ratio has the potential to see an increase in the near term on expectations of revival in consumer demand and favorable shareholder return policy, thus driving the stock price higher.

What’s the likely trigger and timing for further upside?

The global spread of coronavirus in early 2020 affected industrial and economic activity, which affected consumption and consumer spending. Additionally, the lockdowns in major global cities over recent months also had an adverse effect on global companies with global supply chains like Coca-Cola. KO’s Q1 2020 was largely shielded as the impact of coronavirus has mostly been felt since March. However, the second quarter which was expected to reflect the full impact of the crisis, saw a 28% decline in Coca-Cola’s revenues on a y-o-y basis which just met expectations at $7.2 billion, while EPS came in at $0.42, which was above market expectations of $0.40.

However, over the coming weeks, we expect continued improvement in demand and subdued growth in the number of new Covid-19 cases in the U.S. compared to the rate seen in April-May to boost market expectations. Additionally, the gradual lifting of lockdowns is also giving investors confidence that developed markets have put the worst of the pandemic behind them. Following the Fed stimulus — which helped set a floor on fear — the market has been willing to “look through” the current weak period and take a longer-term view, with investors now mainly focusing their attention on 2021 results.

With the worst quarter (Q2 2020) with respect to coronavirus impact behind us, and as the global economy opens up and lockdowns are lifted in phases, consumer demand is expected to pick up while supply bottlenecks are likely to ease, thus benefiting large companies like KO which have global supply chains. Additionally, Coke is also looking to streamline its portfolio, with a focus on larger and more popular brands. Less than half of its 400 major brands account for 98% of the company’s revenue. KO won’t be completely abandoning smaller brands, instead, it will prioritize those that are growing. This could be reflected in the form of higher revenue and improving earnings from Q4 2020 onward, followed by healthy revenue growth in 2021. Though the stock has recovered sharply since March 2020, with investors’ focus now primarily shifting to 2021 numbers, we believe expectations of healthy revenue and margin growth is likely to drive the stock slightly higher from its current level of $48. Coca-Cola’s valuation by Trefis gives a fair price estimate of $50 per share, close to 5% higher that its current market price.

So while Coca-Cola’s investors have a chance to see further growth in their wealth, you can also see how Coca-Cola’s performance compares with close rivals PepsiCo and with Keurig Dr Pepper. 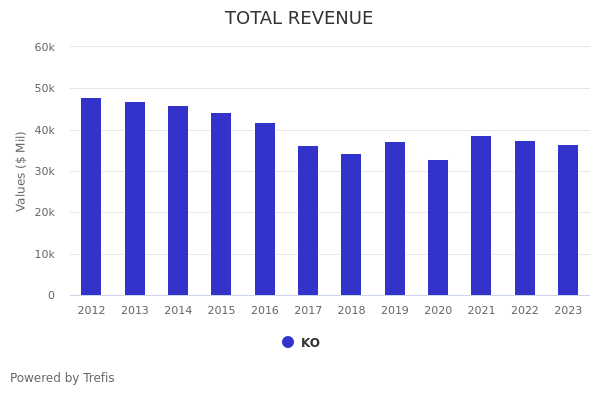