Developing a new drug is a cumbersome process and can take up to 10 years. And often times many drugs have severe side-effects which go unnoticed during the trials. Almost all pharma companies have faced litigation against their drugs and subsequently cash settlement. In midst of all of this, pharma companies have become increasingly cautious regarding the quality of their products to avoid any further judicial proceedings arising from them. Johnson & Johnson (NYSE:JNJ) seems to be having issues as in the past year it has seen several of its products getting recalled. Recently, McNeil Consumer Healthcare, an arm of JNJ, recalled over 50,000 packages of its diarrhea medicine Imodium. [1]

On a different note, the company is planning to increase its presence in Chinese mental disease market with acquisitions, which is a huge market. [2] Whereas, JNJ’s Oncology segment is moving smoothly with recently published positive reports about Zytiga. Zytiga helped eliminate tumors in patients suffering from metastatic prostate cancer. [3]

We maintain a $72.45 price estimate for JNJ, which is nearly 15% above market price largely based on the its long term outlook.

China’s ever evolving pharmaceutical market is a huge one with nearly 170 million people (half of U.S. population) suffering from mental illnesses alone. Many pharma companies are eying to capture this market. JNJ is no different as it has already planned to acquire Chinese companies or products for mental diseases. Drug spending in China is expected to reach nearly $125 billion by 2015, according to IMS Health, which bodes well with JNJ’s plans. However, price cuts in China to make healthcare cheaper remains a concern among all pharma companies. JNJ’s market share in Central nervous system (CNS) drug market has been declining over the past few years. We believe JNJ’s Chinese acquisitions in CNS segment would fortify its position in global CNS markets. CNS forms nearly 6% of the $72 Price estimate for JNJ.

According to a study, JNJ’s drug for metastatic prostate cancer Zytiga has helped eliminate aggressive tumors in some patients after their prostate glands were removed. This drug allowed no more spreading of the tumor in nearly 33% of patients under treatment. Previously, other drugs have failed to improve survival of such patients post surgery.

Zytiga grossed around $200 million in 2011 sales and analysts are already seeing a $1 billion sales potential for the drug. JNJ has a very modest position in oncology drug market and with similar products like Zytiga, we can expect JNJ to present a better showing in this market going forward. 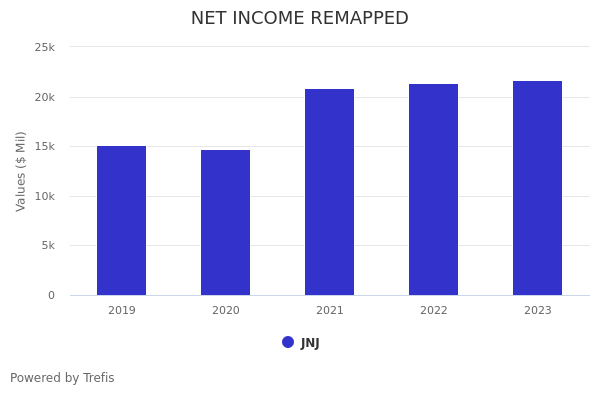 Johnson & Johnson vs. Centene: With Return Forecast Of 71%, Centene Is A Better Bet

Why Johnson & Johnson's Free Cash Flow was less than Net Income in 2021?

Johnson & Johnson vs. Pfizer: With Return Forecast Of 25%, Pfizer Is A Better Bet