See our full analysis on HP

The Envy Ultrabook and Sleekbook line of HP will drive its PC division which is already the market leader. Currently this division constitutes near 15 percent of the current Trefis price estimate of HP. With HP regaining its top spot in the PC market, these ultra-thin PC’s can be a serious threat to Macbooks, especially MacBook Air. It has also adopted the design to run AMD chips and this line of Sleekbooks are priced significantly lower, starting at $599. This is much cheaper than the Ultrabook range that starts at $799 and is much cheaper than Dells Ultrabook, the Dell XPS 13 which starts at $999. With a range of cheaper ultra thin laptops, it can potentially gain a much larger market share than expected as its competitors have no offering in this range.

HP is trying to offer PaaS Printing As A Service to its customers. The advantage of doing this would be better pricing power for HP and it is cheaper to use for its clients. The biggest advantage for HP however tends to be the nature of service contracts, which are usually long term and would ensure consistent revenues. We expect HP to focus more on managed printing services going forward. It has also made moves to capture the printing needs of homes and small businesses by entering into an agreement with UPS, to provide print solutions on the go from any The UPS store across USA.

The much awaited HP Cloud entered public beta last week. Based on OpenStack, this is a direct competitor to Amazon Web Services. The services are currently available to a limited number of customers. Some of the services are HP Cloud Compute, HP Cloud Object Storage and HP Cloud CDN. This will have a pay as you go pricing. Cloud services are potentially the biggest new revenue source for HP in 2012. HP Services constitute 39.3 percent of our current Trefis price estimate of HP. It currently competes with Amazon(NASDAQ: AMZN) in this space. [2]

We currently have a $39 Trefis price estimate for HP, which is around 40% above of the current market price. 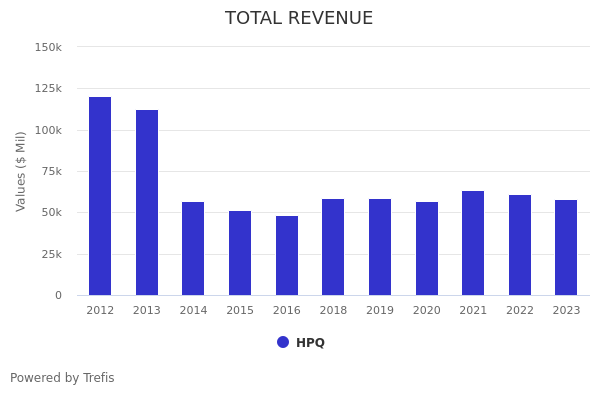 Up 5% In A Fortnight, Can HP Inc. Stock Continue Outperforming The Market?

What’s Next For HP Inc. Stock After Dropping 5% Last Week?

Here’s Why Hewlett-Packard’s Stock Could Touch $10

Explaining The Big Rally In Xerox Stock This Year

How Can HPQ’s Refresh Of OMEN And Spectre PC Lineup Impact Its Valuation?