One thing that is clear from Goldman Sachs’ (NYSE:GS) Q3 results is that it is time for the investment bank to stop thinking of its commodities trading unit as the money-minting machine it was before the downturn. A lot has changed in the global regulatory environment since 2008, and if the fact that all of Goldman’s U.S. investment banking peers shuttered their commodities units over 2014-15 wasn’t reason enough to convince the bank about this shift, then the poor revenues for the unit in each of the last three quarters definitely should be. It should be noted that Goldman called Q2 2017 the “worst quarter on record” for the commodities unit, and mentioned that an important reason for the sharp decline in its total trading revenues for Q3 2017 compared to Q3 2016 was “significantly lower net revenues in commodities.” Goldman likely needs to start looking elsewhere for future growth.

Goldman’s growth focus in the future should be on more stable revenue streams like its investment management business. Goldman has done well on this front since its acquisition of GE Capital Bank in mid-2015. The bank currently offers one of the highest interest rates in the country on its online savings account, online-only loans through its Marcus platform, and online retirement savings products through Honest Dollar, and is looking to expand its offerings outside the U.S. next year. More recently, Goldman announced plans to enter the U.S. mortgage industry through its acquisition of the mortgage lender Genesis Capital.

In view of Goldman’s push into retail banking and its success in the rapidly growing ETF industry, we increased our price estimate for Goldman’s stock upwards from $230 to $245. The new price estimate is slightly ahead of the current market price. 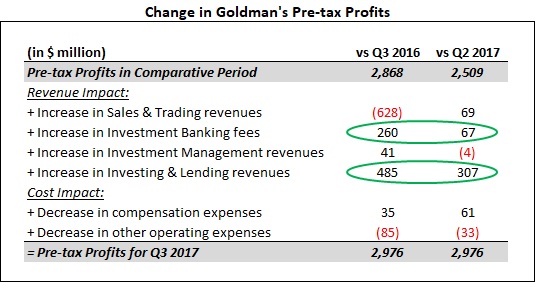 The table above summarizes the factors that aided Goldman’s pre-tax profit figure for Q3 2017 compared to the figures in Q3 2016 and Q2 2017. The sharp reduction in sales & trading revenues compared to the year-ago period was expected, as extremely low volatility across global capital markets hurt trading volumes. But upbeat investment banking fees, and strong gains in the bank’s investment portfolio mitigated the impact of this on the top line – allowing Goldman to report its highest quarterly revenues figure since Q2 2015.

As seen here, revenues from three of Goldman’s five investment banking units were lower than those in comparative prior periods. The sequential improvement in FICC trading revenues is because Goldman had incurred huge commodity trading losses it Q2 2017. The equity trading desk also succumbed to all-time low volatility in U.S. equity markets. Goldman’s M&A advisory unit was particularly upbeat, though, as advisory fees of $911 million for the quarter were the second highest since 2008 (after $961 million in Q1 2015).

Another bright spot in Goldman Sachs’ results was the strong inflows of assets for its investment management unit. Under the current reporting structure, Goldman clubs its retail banking products like loans and deposits as a part of all assets under supervision. Improved market valuations complemented the inflows to help Goldman’s total assets under supervision swell to a record $1.46 trillion by the end of Q3. The table below summarizes the factors that contributed to the change in size of investment management assets from the end of Q3 2016 and Q2 2017.

Going forward, we believe that Goldman’s online savings accounts will be the largest growth segment, as the bank expands its portfolio of retail banking offerings. You can see how changes to the total asset base impacts our price estimate for Goldman by modifying the chart below. 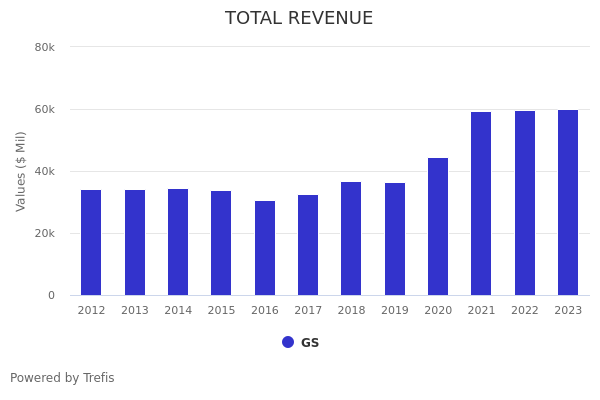