The fall of 2014 brings more excitement for coffee lovers as the Vermont based K-Cups maker, Keurig Green Mountain (NASDAQ:GMCR) announced yet another multi-year licensing, manufacturing and distribution deal with one of the largest consumer packaged food and beverage companies, Kraft Foods Group (NASDAQ:KRFT). Keurig Green Mountain struck this deal on August 22, to bring the Kraft’s branded coffees in its popular portion pack formats. [1] The addition of Kraft’s coffee brands such as Maxwell House, Gevalia and Yuban to the Keurig family will increase beverage options for Keurig’s customers. Available for both at-home and away-from-home channels, the portion packs will be offered in K-Cups format, K-Carafe packs and Keurig Bolt Packs.

Over the last six months, Keurig has entered into several distribution deals with some of the top retail chains and coffee brands, with the motive of accelerating its top line growth. We have discussed the possible impacts of these deals on the company’s revenue growth in our prior articles – Keurig-Nestlé Deal: Creamer Added K-Cups To Boost Net Sales and Keurig Green Mountain’s Partnership With Subway To Boost Volumes Of Brewers and K-Cups.

As mentioned before, Keurig has accelerated its pace in adding top coffee brands to its arsenal. Over the last few years, Keurig Green Mountain has signed several distribution agreements with some major brands such as Dunkin’ Brands (NASDAQ: DNKN), Peet’s Coffee and Starbucks Corporation (NASDAQ:SBUX) to provide its consumers with high quality premium coffee at nominal rates. Being the leading coffee brands in the U.S., their premium coffee in Keurig’s portion packs not only turned out to be a convenient option for customers, but was also also an economical option at nominal rates without any compromise in the quality and taste. Starbucks dominated the emerging single-serve market with 70% of the market share. Teaming up with Starbucks and Dunkin’ Brands in 2011 decreased the potential competition from these brands in the single-serve market, making them favorable deals for Keurig Green Mountain.

This year, Keurig entered into some game changing deals and partnerships with companies having strong brand appeal and huge customer base such as Coca-Cola (NYSE:KO), the Nestle U.S. division, Subway and J.M. Smucker Co. Although the deal structures with these brands were different, the basic idea behind all these partnerships was to expand its reach to the domestic population with more options. However, the company’s deals can be summarized with some logical reasons:

The single-serve market is gaining momentum at a faster pace than expected, closing in on the traditionally ready-to-drink coffee market. According to the Mintel Research Group, in 2013, single cup coffee sales rose to $3.1 billion, up 213% from 2011, although it still accounts for half the volume of regular coffee. [2] However, looking at the slow growth of traditional roasted coffee sales, we can estimate that the single serve market might slowly shrink the gap and eventually outpace the former. Roasted coffee sales were $6 billion in 2013.

According to the last 12-month trend, Single-cup coffee is one of the fastest growing segment in the industry. Market share of K-Cups in the market increased from 6% in 2011 to 26% in 2013. Moreover, the U.S. single-serve retail market is dominated by Keurig Green Mountain. In September 2013, Keurig branded K-Cups accounted for 45% of the total K-Cup volume share, which shoots up to 79% when combined with its licensed brands’ K-Cup sales. [3] 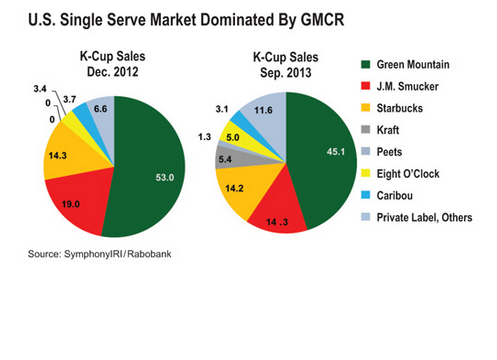 Clearly, the expansion scope for Keurig in this segment is more than any of its peers as people are trying to replicate the coffee shop experience at home. According to National Coffee Association’s (NCA) info-graphic report for 2014, the daily consumption of coffee in the U.S. is still strong and steady, with the 34% of the Americans consuming gourmet coffee daily, up 3% year-over-year. [4] Thus, Keurig’s latest deals with Harris Teeter and Kraft Foods Group is a huge opportunity for the company to further strengthen its hold on the market share.

Kraft Foods is one of the largest consumer packaged food and beverage companies and distributes some of the popular packaged coffee such as Maxwell House, Gevalia, Yuban and now McCafe as well. On August 19, Kraft Foods announced its deal to expand the manufacture, marketing and distribution of McDonald’s McCafe brand in the U.S., with effect from 2015. [5]

Overall, the new business additions provide a huge platform to Keurig Green Mountain to strengthen its hold on the single-serve market. If these deals turn out to be successful, Keurig might continue to add more coffee brands and retail chains to its list of licensed partners.