First Solar (NASDAQ:FSLR) is set to release its Q2 results. We expect the company’s panel manufacturing business to continue to report weak results on the ongoing decline in panel prices. Global solar panel demand is set to fall in 2012 because of a major pull-back in subsidies in markets such as Germany. First Solar has shifted its focus to the systems installations business over the past few quarters, and we expect it to report strong revenues in this segment because of its strong project pipeline.

Click here for our full analysis of First Solar

Solar panel prices have continued to slide in 2012 as the industry capacity significantly exceeds demand. Demand for panels is set to drop in 2012 despite a ramp-up in installations in markets such as China and Japan. Prices have failed to pick up despite reports of strong growth in panel sales in the U.S. in Q1 2012. Because of persistent overcapacity, competition from low cost Chinese manufacturers and weak growth in panel demand, panel prices are not expected to see a sharp recovery. First Solar has responded to the changing market by announcing cost-cutting measures, and it plans to shut down production in Germany.

Installations of photovoltaic systems have become one of the major drivers of First Solar’s valuation. The company is involved in multiple, large-scale developments in the U.S. that include the 550 MW Topaz farm in California and the 290 MW Agua Caliente project in Arizona. [1] In June, First Solar also announced a $446 million solar project in Australia. With more than 2.7 GW of project in progress, the systems business is expected to help the company maintain stable revenues over the next few quarters.

We are looking to revise our $22 price estimate for First Solar. 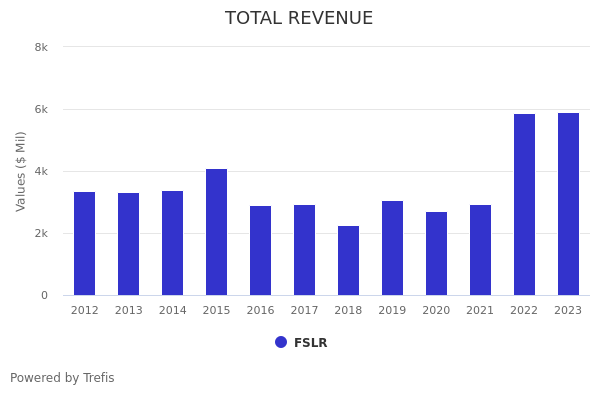 Why First Solar Stock Moved: FSLR Stock Has Gained 92% Since 2017 Primarily Due To Favorable Change In Price To Sales Multiple (P/S)

Better Bet Than FSLR Stock: Pay Less Than First Solar To Get More From Stocks PYPL, LIN, ABT, CVS, COP

First Solar Stock Has Returned 2x More Than The S&P Since 2017, Despite Dropping Sales

First Solar Stock Has Returned 75% To Investors Since Late 2018: Here’s Why

Will Hydrogen Stocks Benefit As The E.U. Looks To De-Risk Gas Supplies?

Down 11% In A Week, Could First Solar Stock Rebound Anytime Soon?