In the fourth quarter, Freeport McMoRan Copper & Gold (NYSE: FCX) spent $1.57 to produce each pound of copper. That was nearly triple its costs from the year-ago period, and more than 50 percent above the average for the year. Management also forecast that copper production would cost $1.38 per pound for full-year 2012, a 36.6 percent jump above the average for 2011.

But those higher costs didn’t stop the company from posting $6.6 billion in operating cash flows for the full year, financing $1.5 billion in dividends and $2.5 billion in capital costs. And management was also able to pay off $1.2 billion in debt, cutting 25 percent from its total leverage.

Freeport’s success, however, was due entirely to its ability to produce from a growing inventory of global projects as well as robust metals pricing which were able to more than offset steeper costs. Full-year realized selling prices for copper, for example, rose another 7.5 percent to $3.86 per pound. That was matched by similar price gains for its gold, cobalt and molybdenum output, which together accounted for slightly less than 30 percent of full-year revenue.

As a whole, total reported inventories of refined copper declined globally by 380,000 tons in 2011, while demand rose 5.1 percent. As a result, the supply/demand imbalance in the copper market is expected to persist for at least another year, as current production remains insufficient to cover demand despite slowing global economic growth.

With copper already in tight supply, further disruptions to copper production could mean the metal will be bid higher. The chart below shows the copper market adjusting prices upward following a protracted downturn.

Freeport’s sharply higher costs can be largely attributed to labor unrest, which as of late February had forced the closure of its giant Grasberg mine in Indonesia. The strike itself was settled December 14, when Freeport agreed to raise wages. But some employees who took part in the strike allegedly attacked those who did not participate, with two workers found shot dead near the mine. That promises to interrupt output further, driving up costs and cutting production.

With $41 billion in market capitalization and some $20.9 billion in revenue last year, Freeport’s certainly big enough to handle the trouble in Indonesia. And even with Grasberg offline, the company has enough other projects globally to ensure another year of solid results. Two-thirds of copper reserves, for example, are now located in the Americas, as is the bulk of molybdenum output.

The company could even withstand a still highly unlikely permanent loss of Grasberg. The incident, however, is yet another example of how successful mining companies must continually expand their scale. That’s the only way to deal with today’s challenges of having to go ever further and ever deeper to meet demand, assuming more operating, financial and political risk along the way.

Freeport is far from the only major mining company facing strikes. Even giant BHP Billiton (NYSE: BHP), for example, has faced major strikes in recent months at its immensely profitable coking coal mines in its home country of Australia.

These are economics that continue to drive industry consolidation, from producers of copper and iron ore to coal and rare metals. In this great game, even players as large as Freeport are potential prey.

Xstrata (LN: XTA, OTC: XSRAF), for example, is now officially the target of a takeover by its 34 percent owner Glencore International (LN: GLEN, OTC: GLNCY). That deal would unite what’s essentially a trading company owner with the resource-rich company that’s its principal investment.

Not surprisingly, we’ve seen more than a few deals in the mining industry in recent years, with metallurgical coal or “coking” coal producers a popular target. The Glencore/Xstrata deal, however, takes things to a scale not seen since BHP’s unsuccessful pursuit of Rio Tinto (ASX: RIO, NYSE: RIO). In fact, if successful it would be the biggest mining industry transaction ever. And Xstrata’s rivals have taken notice.

Freeport remains a premier bet on copper, a resource that despite its price volatility is set to be in rising demand for years to come. 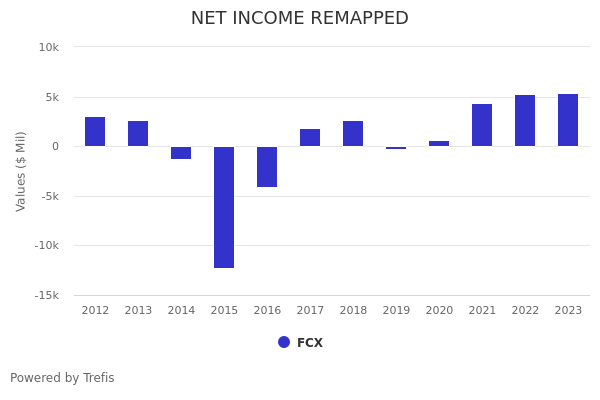 Why Freeport Stock Moved: FCX Stock Has Gained 240% Since 2018 Primarily Due To Favorable Change In Price To Sales Multiple (P/S)

Why did Freeport-McMoRan Stock Lose 30% In Value?

Is Freeport-McMoRan Stock A Buy?

How Has Resistance In Copper Prices Impacted Freeport-McMoRan Stock?

Amidst Strong Rally In Copper Price, Will Freeport-McMoRan Stock Continue To Shine?

How Has The Recent Drop In Copper Price Affected Freeport-McMoRan Stock?

Why Freeport-McMoRan Lost 11% Of Its Value In A Month?

Where Is Freeport-McMoRan Stock Headed After Dropping 8% In A Week?

Will Freeport-McMoRan Stock Rise Further After Jumping 60% In Three Months?

Freeport-McMoRan Stock Soars 500% – What Has Changed?