The technology revolution of the 90’s led to a considerable shift in consumer base from offline to online platforms, which benefited online travel agencies such as Expedia (NASDAQ:EXPE), Priceline (NASDAQ:PCLN), TripAdvisor (NASDAQ:TRIP) etc. The industry is now in the midst of another transition phase, with an increasing number of users shifting from personal computers to mobile devices to access the web.

Targeting the mobile travel space, Expedia added yet another dimension to its growth strategy last year by launching a number of applications for iPhone and Android users. As it witnesses an increasing proportion of its traffic moving to the mobile platform, the company intends to continue investing in developing the same. While the mobile space poses a number of challenges in terms of design and developments, we believe that it is worth the investment and would help fuel Expedia’s business in the years ahead.

Our current price estimate of $63 for Expedia is almost in line with the current market price. In this article we talk about the opportunities and challenges in the growing mobile travel market and the steps taken by Expedia to deal with the same.

See our complete analysis for Expedia

With the rapid adoption of smartphones and tablets, mobile devices are increasing becoming a preferred and more convenient option for online searches and shopping. Unlike the online revolution of the 90’s, the mobile revolution is growing equally fast in both developed and emerging countries.

As per a recent study, commissioned by Expedia and conducted by comScore, around 48% of users use a tablet or smartphone to plan their trips while 44% use a mobile device to search for their next trip, 44% out of which prefer using an application to do the same. Additionally, close to 60% of the mobile bookings for airlines and hotels are typically done using an application.

Aiming to tap into the rapidly growing user base of online travel bookings via mobile devices, Expedia launched a new update for its mobile application earlier this month. The Expedia application, which previously featured only hotels, now offers millions of flight options for users to view and book from, on more than 200 airlines in the US. The updated application also offers better visuals for more than 140,000 hotel properties worldwide. Additionally, people using Expedia’s mobile application have access to exclusive deals (only for mobile users) which offers lucrative discounts, which can go up to 60%, on hotel bookings.

Receiving only 4% traffic through mobile bookings in 2011, Expedia aims to continue innovating in this segment to tap the rapidly expanding mobile user base. The company claims that the Expedia hotels app has been downloaded approximately 5 million times in 220 different countries and territories, and 10% of its customers today are engaging in mobile. [1] We expect the mobile penetration to increase in the future, which should augur well for Expedia’s valuation.

While the mobile platform offers immense growth potential, it poses a number of challenges in terms of design and developments, which require significant investments. Additionally, as per Expedia, the conversion rate (percentage of people browsing its website who actually make a booking) for mobile is much lower compared to PCs, which lowers the monetization benefits from the platform.

However, when it comes to the last-minute bookings business, the mobile platform seems to be a preferred choice among users. As per a recent report by Google, mobile searches for last minute hotel bookings increased by 411% between June 2011 to June 2012, whereas the desktop searches declined by 79%. [2] Expedia claims that around 60-70% of the mobile bookings received by it are for the same day (24 hour) hotel bookings.

Nevertheless, we consider growth in both tablets and smartphones to be of strategic importance to Expedia and believe that the mobile space is worth the investment as it could help expand the company’s user base in the future. Expedia is currently working on introducing an air experience on its iOS app and expects mobile penetration to increase in the future.

Our price estimate of $63.12 for Expedia is almost in-line with the current market price. 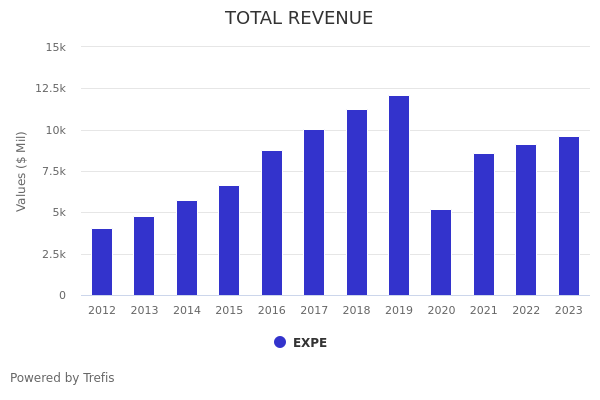 Expedia Stock Down 46% YTD, Can It Rebound?

Earnings Beat In The Cards For Expedia’s Stock?