Last year was a fabulous one for Estée Lauder (NYSE:EL) as it saw consistent double-digit growth, improved operating margins and strong market share growth in Skin Care, which is its largest business. Apart from the growth in the U.S. prestige beauty market, which grew in double digits in 2011, and strong sales in China and online, what stood out for Estée Lauder was its ability to capitalize on the impressive growth in the travel retail channel. Estée Lauder is one of the leading cosmetics and beauty care players globally and competes with Revlon (NYSE:REV), L’Oreal (PINK:LRLCY) and Avon Products (NYSE:AVP).

According to a recent Verdict report, the global travel retail has quickly become the fastest-growing retail channel for beauty, fashion and accessory products. It estimates that the travel retail market is likely to grow sharply by 60% to $44 billion by 2015. In particular, beauty sales are likely to grow by more than 80% in the next five years. (Read Travel Retail Industry Takes a Beauty Boost)

Growth in travel retail is driven predominantly by passenger volumes, which are increasing rapidly in emerging markets rather than an increase in the average spend per passenger. In 2011, Europe was the largest airport retailing market, but it could be overtaken by Asia Pacific in 2012, which could grow by 75% by 2015. The Middle East & Africa is emerging as the second-fastest growing market, which is likely to expand by 40% by 2015.

Estée Lauder has been able to strongly capitalize on the rising travel retail market over the past few quarters. The channel has performed particularly well within Europe, Asia-Pacific, Middle East & Africa, generating double-digit net sales growth in fiscal 2011.

With improved global airline passenger traffic, Estée Lauder is focused on improving its marketing and distribution at airports to successfully convert travelers into purchasers. Its travel-retail business has benefited from its strategic investments in local markets as well as from the increase in international travelers, particularly in Asia.

Strong market growth and a comprehensive prestige beauty and luxury products portfolio helped the company achieve high growth and market share expansion in 2011. Riding over excellent international growth, it also achieved its operating margins target of 12-13% by fiscal 2013, two years in advance and has now set a new operating margin target of 14.5% to 15% by 2014. As a result, the company’s stock swelled by more than 40% during 2011, and we believe it still holds significant value.

We have a $69.70 Trefis price estimate for Estee Lauder stock, 10% ahead of the current market price.

Understand What Drives a Stock at Trefis 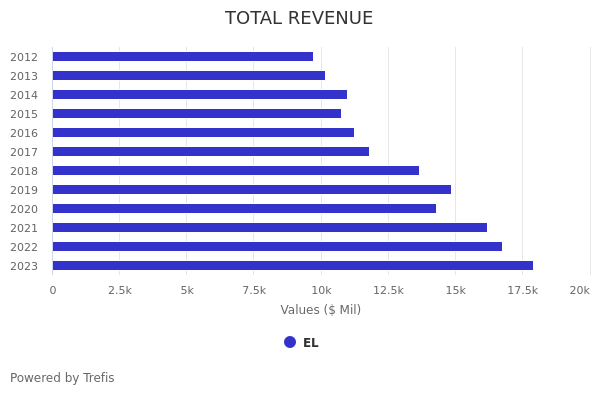