eBay (NASDAQ:EBAY) will report its Q2 2013 earnings on 17th July, and we expect a strong performance from PayPal and continued improvement in the company’s marketplaces business. PayPal has been a key growth driver for eBay and continues to benefit from eBay’s simultaneous efforts to expand its global and offline presence, the diversification of the target market from only eBay to other merchant services, tie-ups with Discover Financial Services and NCR, global expansion and increasing usage of mobile devices for shopping and payments. We expect these factors to also drive improvement in eBay’s marketplaces business. PayPal and marketplaces businesses together account for roughly 85% of eBay’s value according to our estimates. Let’s take a closer look at what’s working for eBay.

Check out our complete analysis of eBay

﻿﻿We expect PayPal users to grow as eBay continues to integrate Paypal into its adjacent marketplaces platforms such as ‘Shopping.com’ and ‘Rent.com’. The growing penetration of PayPal on third-party merchant platforms will also help. PayPal led its growth 2012 with revenues growing by roughly 25%. This growth was accompanied by similar growth in Total Payment Volume (TPV), which further jumped over 20% in the first quarter of 2013 (year-over-year).

PayPal’s performance was impressive in Q1 2013 as well with revenues growing by 20%. It finished the quarter with 128 million active accounts globally adding 5 million new active accounts during the period. During its last earnings announcement, eBay stated that 25% of PayPal account holders made at least one purchase through mobile during the previous 12 month period. Mobile is going to be one of the key growth areas for PayPal, and the company is promoting mobile transactions as an alternative to payment by cards through its mobile app. The service works through the PayPal app that customers can use to check-in to the store. They can then place an order and pay using their PayPal account. The merchant is able to see the name and photo ID of the checked-in customer via its point of sale terminal for security purposes. PayPal has partnered with point of sale technology companies such as MICROS, Island Pacific, Kounta and Vend and will soon add more retailers and hospitality partners into the mix.

PayPal announced an arrangement with Discover in August last year which was expected to come into effect in the second quarter of 2013. As part of the deal, PayPal has been issuing payment cards to its active users in the U.S. The new card will have a Discover Issuer Identification Number, or IIN, which is a code that identifies the card holder, and will allow users to buy from merchants that are part of Discover’s network. PayPal will charge merchants when users pay with the new cards, and in turn, will pay Discover for access to its network on a per-transaction basis. PayPal’s footprint will expand to cover an additional 7 million stores post the deal. We expect the enhanced ubiquity of the payment service will positively impact the number of transactions per PayPal account.

Marketplaces Business Is Likely To Do Well

eBay continues to grow as one of the key online retail destinations. During the first quarter of 2013, fixed price listings accounted for almost 70% of global gross merchandise volume. eBay has announced a simplified pricing structure for the U.S. sellers, and we expect the benefits to become apparent in the upcoming quarterly results. Besides this, eBay’s marketplaces business will benefit from international expansion in BRIC (Brazil, Russia, India and China) countries. The company officially launched its localized website in Russia in Q1 2013 and a full marketing campaign, which includes TV, was launched in Q2. In India, the company has reduced its fee to attract sellers and gaining access to Snapdeal’s vast customer base will further help it strengthen its core business.

We currently have a $56.35 Trefis price estimate for eBay which is roughly inline with the market price. 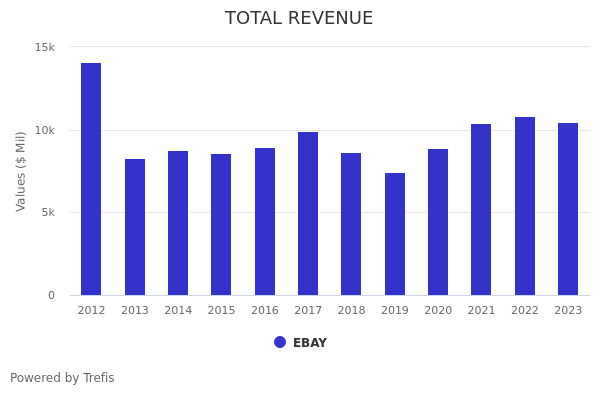 eBay Stock Lost 9% In One Week, What To Expect?

MercadoLibre’s Stock Down In Last Two Weeks, Is It A Good Pick?

What’s Next For eBay’s Stock?

E-Commerce Stocks Have Underperformed This Year. Should You Buy Ahead Of The Holidays?

Which Stocks Are More Attractive Than eBay’s Stock?

E-Commerce Stocks To Buy Ahead Of The Holiday Shopping Season

eBay’s Stock To Rise As Focus Continues On Core Business?