The Chinese automotive market was predicted to slow down this year from the previously seen high double-digit growth levels, but the decline has come sooner than many expected. The GDP forecast for the country still remains a strong 7% for this year, but the precipitous fall in the stock market, industry overcapacity, slowdowns in the real estate and infrastructure sectors have dented customer demand, bringing about a change in the dynamics of China’s previously thriving automotive market.

The Chinese customer was known to favor the well-renowned foreign brands that asked for a premium for their products. This strong brand awareness is what drew luxury foreign brands such as Volkswagen AG‘s (OTCMKTS:VLKAY) Audi and Porsche, BMW, Daimler AG‘s Mercedes, Toyota Motors‘ (NYSE:TM) Lexus, and Tata Motors‘ (NYSE:TTM) Jaguar Land Rover to China. But the recent headwinds in the country, added restrictions on sales of vehicles and number plates, and shift in customer preferences towards lower-priced vehicles, are hurting these premium automakers. China, which is expected to overtake the U.S. as the world’s largest premium vehicle market soon, has surely slowed down a step or two in the race to become the largest luxury car market. 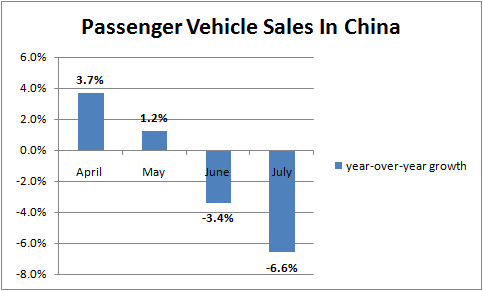 A tough pricing environment in China, and slight reduction in disposable incomes, have impacted the financials of key foreign automakers, which have lost approximately 3.7 percentage points of market share to domestic manufacturers so far this year in the country. Let’s discuss the individual performances of some of these leading brands.

Through the first half of the year, Volkswagen struggled to extract growth from China, its single largest market, recording a 4% decline in vehicle deliveries in the country. What has also hurt the German giant is that its strongest premium brand, and the highest-selling luxury brand in China–Audi, has had a weak showing in the country, selling only 1.9% more vehicles than the year ago period through June. This growth of 1.9% is still lower than the 4.8% growth in passenger vehicle deliveries in the country. Porsche, on the other hand, sold 41% more vehicles through July, compared to 2014 levels, but is still a small contributor volume-wise (approximately 2% of Volkswagen’s China deliveries). However, although low on volumes, Porsche’s good performance and Audi’s positive growth are consequential not only to the German group’s top line, but also the bottom line.

Volkswagen group’s operating margins are just above 6%, and Audi’s 9.7%, and Porsche’s industry-leading 15.7% operating margins, are instrumental in pushing the company’s profitability up. Lower volume sales in China have had a detrimental impact on the company’s financials through the first half of the year. There has been a shift in consumer preference from the well-known higher priced foreign-made vehicles to budget SUVs and sedans, which has cost Volkswagen.

BMW is the second highest-selling luxury automaker in China, but hurt by the tepid economic conditions, and negative customer sentiment, the brand’s sales have grown only 2.3% in the country through the first half. In fact, BMW’s China sales declined in both May and June– the first fall in a decade. This showed in the company’s financials too, with operating margins falling to 8.4% in Q2, lower than the previously achieved 9-10% margins, and much lower than Mercedes’ 10.5% operating margins. This was impacted by the absence of the boost from China, where due to the higher model pricing, profitability remains up for foreign manufacturers. [1] Lower demand might force BMW to cut supply in China, hampering volume sales going forward.

The contribution of China to Jaguar Land Rover’s (JLR) net retail sales has decreased from 28% in Q1 fiscal 2015 to 18% this Q1 quarter (ended June), due to a large 33% fall in retail volume sales in the country. The impact of the fall in China demand is also apparent in Tata Motors’ financials. Net revenues fell 6% and profit after tax was almost half of what it was in the last June quarter, hurt by the decline in China sales at JLR, which forms almost 90% of the group’s valuation as per our estimates.

But the case with JLR might be bad timing. The brand’s first locally built vehicle in China hasn’t been received as well as expected. JLR has struggled to ramp up sales of the Evoque, which is rolling out from a completely new manufacturing facility in China, the first time JLR is building vehicles from scratch outside the U.K. It might take time for the company to speed up production. In order to boost its retail sales, the brand cut the starting price of its China-produced Evoque by 50,000 yuan ($8,050) to 398,000 yuan ($64,108) recently. [2] The brand is also launching the new Jaguar XF and XJ models this year, and running out the Freelander, which will be replaced by the Discovery Sport. Once the reach and availability of the new locally-built models increase in the country, the company’s sales might begin to turn around, seeing how demand for premium SUVs and Crossovers remains strong.

But amid the normalization of the Chinese automotive market, which declined 3.4% in June, and a further 6.6% in July, Mercedes and Lexus seem to be doing well.

Mercedes has grown its volume sales by 18% through May in China, and by a whopping 38.5% in June, and 41.5% in July. With a 19% rise in revenues in Q2, over the previous year, and a whopping 58% rise in operating profits, the brand’s EBIT margins have reached 10.5%– higher than that at Audi and BMW presently. This comes after Mercedes spent two years with margins below its competition due to large investment costs and model makeover costs. Seems like Mercedes is now reaping the benefits of its large investments, and with the massive jump in China, the brand is now well placed, considering the large demand for SUVs that persists in the market. Sales of SUVs are up approximately 45% in China through July. Audi sells 1.5x the vehicles sold by Mercedes in China presently, but the latter seems better placed in the market, also, with better profitability.

The Japanese brand has held off building its facility in China, seeing how the demand remains low, and the weaker yen makes it cheaper to keep manufacturing vehicles in Japan. Toyota will plan to build a new assembly line in the country only after it further strengthens the Lexus brand, and starts selling well over 100,000 units annually in the region. Lexus’ growth has been solid in China despite the weak environment, and the premium brand is forecast to sell 83,700 units this year, up 12% year-over-year.

The Chinese luxury vehicle market so far this year hasn’t been too kind to the likes of Audi and BMW, and even JLR, which were witnessing strong growth in the country in the previous years. On the other hand, Mercedes– the perpetual third behind Audi and BMW in China, and Lexus– which hasn’t been able to catch up to the German trio, are ramping up sales in an otherwise slow market. This might be due to their successful lineups of SUVs and Crossovers, which are in vogue, or maybe these brands were just better prepared to face the potential changes in the automotive environment in the country. Either way, Mercedes and Lexus seem to be better placed in China than their competition, at least for the time being.

What’s Next For Kohl’s Stock?

Should You Buy Merck Stock After An Upbeat Q2?

What To Expect From American International Group Stock In Q2?

What To Expect From Yelp’s Stock?