The year 2017 has not been a great one for Chesapeake Energy (NYSE:CHK). The company’s stock has lost more than 40% of its value year-to-date, despite a 12% rise in crude oil prices. While the company’s profitability did improve due to the improving commodity prices, unpredictable events such as the recent hurricanes along the US Gulf Coast disrupted the company’s operations, delaying its chances of achieving cash flow neutrality in the next couple of years.

To make things worse, the recent surge in oil production in the US, backed by the improvement in commodity prices, has resulted in an excess supply of natural gas, a byproduct of oil drilling. Since most of the existing transportation and storage facilities are fully occupied at the moment, the US oil and gas producers are unable to transport their growing gas output to the Gulf Coast. Further, the Canadian producers have captured a huge chunk of the north US and west US markets, in terms of logistics as well as market share. As the gas output continues to grow, these US drillers are finding it increasingly difficult to park their supply in appropriate places, thereby creating an oversupply of gas in the country.

While this excess gas supply may have ample demand in the global markets in the long term, it is likely to weigh heavily on natural gas prices in the near term. In fact, Henry Hub natural gas prices have dropped from $3.71 per Mcf at the beginning of 2017, to around $3 per Mcf at present. Being one of the largest natural gas producers in the US,  Chesapeake is likely to feel the pinch of this growing gas glut and plunging prices. Although the company expects to meet its 2017 production targets, by achieving an average oil output of 100,000 barrels by the end of the year, the current gas glut, if not corrected soon, will force the company to curtail or cap its existing drilling plans and restrict its gas volumes. 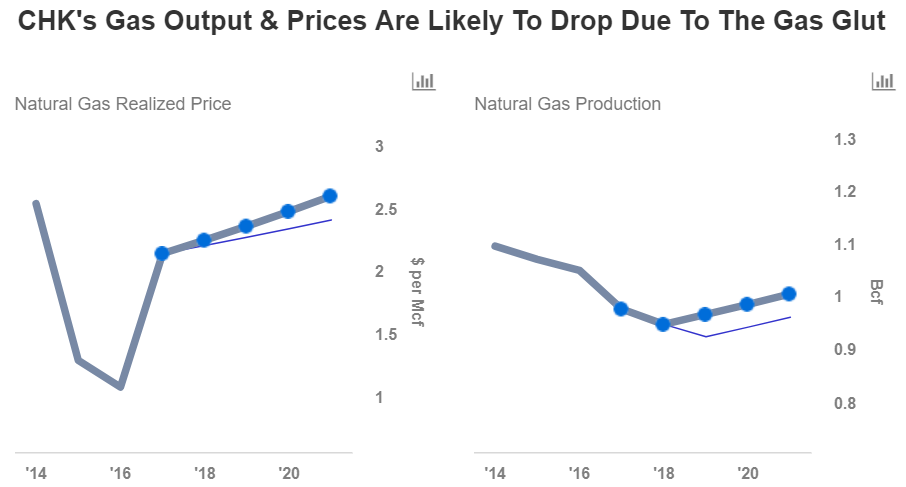 In the charts above, we present our base case estimates for Chesapeake’s natural gas output and price over the next 4 years. According to our estimates, we expect the company to have a market valuation of $4.7 billion, or $5.21 per share. Please note that our base case does not reflect the impact of the ongoing gas glut.

However, we also consider a downside scenario (thin blue line), wherein the company’s realized prices for gas start to decline in 2018 and beyond, propelling the company to pull back its gas output to sustain its operations. In that case, the company’s valuation could drop to $3.9 billion, or $4.26 per share. In other words, if the natural gas glut in the US persists for long, it could create a downside of around 30% for Chesapeake’s valuation. 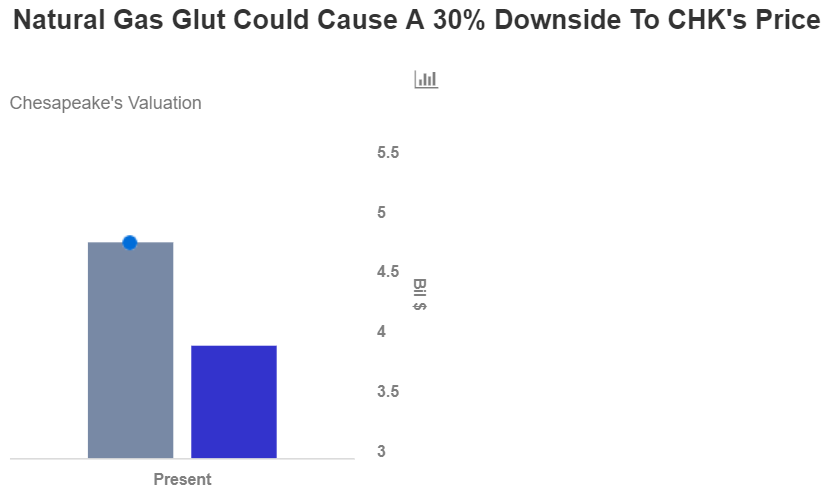 Please feel free to view our base case and downside scenario for Chesapeake here. You can also create your own scenarios and access the impact of different factors on the company’s valuation using our interactive platform.

Will Chesapeake See Improved Results In 2019?