China Telecom (NYSE:CHA) published its results for the first nine months of 2018 on Monday. While the company’s revenues grew by  3.6% year-over-year to 285 billion yuan ($41 billion) for the period driven by a growing wireless and wireline broadband subscriber base, net profits rose by 2.7% year-on-year to 19 billion yuan ($2.73 billion). Below, we take a look at some of the key trends that drove the company’s results.

Our interactive dashboard analysis on the outlook for China Telecom over 2018 details our expectations for the carrier for the rest of this year. You can modify any of our key forecasts and assumptions to gauge the impact of changes on the company’s performance.

China Telecom has outperformed its larger wireless rivals China Mobile and China Unicom in terms of subscriber acquisitions this year, adding a total of 44 million wireless subscribers. In comparison, market leader China Mobile added 29.3 million subscribers in the same period, while China Unicom added about 25.6 million subscribers. The company has benefited from its offering of larger data traffic products which are increasingly popular with subscribers, and also due to its stronger 4G footprint following its collaboration with China Unicom. While the carrier is seeing its handset data traffic surge, rising by 366% year-over-year, its ARPU declined year-over-year, due to lower data tariffs and the government’s move to slash mobile roaming and long distance charges.

The company’s wireline broadband subscriber base grew to 144 million subscribers, up from 131 million in the year-ago period. This is relatively good, considering that the broadband business has been seeing increasing competition, with rival China Mobile doubling down on the space with lower-priced plans while increasing its footprint. China Telecom noted that its broadband ARPU witnessed a year-over-year decline for the first nine months of the year. 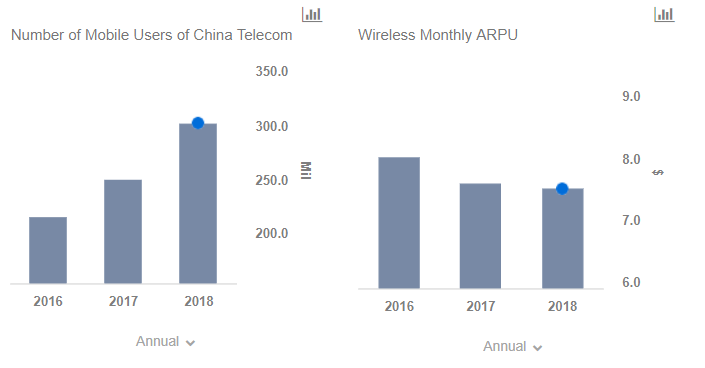 Why Is Airbnb Stock Falling?

China Telecom (CHA) Stock: What's the Chance for a 10% Rebound or Reversion?

China Telecom (CHA) Stock: ... of days in last 3 months had ... or greater fluctuation

Is The Market Undervaluing Chinese Telcos: A Comparison With Verizon & AT&T?

How Has China Telecom’s Wireless Business Fared Versus Rivals?

What To Expect As China Telecom Reports Q1 Results

Why China Telecom Continued To Outperform In January

How Did Chinese Wireless Carriers Fare In October?

China Telecom Continued To Punch Above Its Weight In July, With Strong Subscriber Adds