We believe that there are several industrial stocks that are currently better valued than Caterpillar (NYSE: CAT). Caterpillar’s current market cap-to-operating income ratio of 31x is much higher than levels of under 23x for SPX Corporation (SPXC), Evoqua Water Technologies (AQUA), LAM Research (LRCX) and Pentair (PNR).

Does this gap in valuation between Caterpillar and its peers make sense? We don’t think so, especially if we look at the fundamentals of these companies. More specifically, we arrive at our conclusion by looking at historical trends in revenues, operating income, and market cap-to-operating income ratio for these companies. Our dashboard Better Bet Than Caterpillar Stock: Pay Less To Get More From SPXC, AQUA, LRCX, PNR has more details – parts of which are summarized below.

Although Caterpillar’s revenue base is much larger than SPX, Evoqua, Lam, and Pentair, each of these companies has seen higher growth in revenues and operating income than Caterpillar in the last twelve months as well as the last three-year period.  Yet, they appear to be cheaper than Caterpillar. Despite better profit and revenue growth, these companies have a comparatively lower market cap-to-operating income ratio.

Caterpillar’s comparative underperformance in revenue and operating income growth reinforces our conclusion that the stock is expensive compared to some of its peers, and we think this gap in valuation will eventually narrow over time to favor the group of comparatively less expensive names. As such, we believe that SPX, Evoqua, Lam, and Pentair are currently better buying opportunities compared to Caterpillar.

While CAT stock looks comparatively expensive, 2020 has created many pricing discontinuities which can offer attractive trading opportunities. For example, you’ll be surprised how counter-intuitive the stock valuation is for Waste Management vs. Evoqua.

After Flat Week, Can Akamai Stock Turn Things Around? 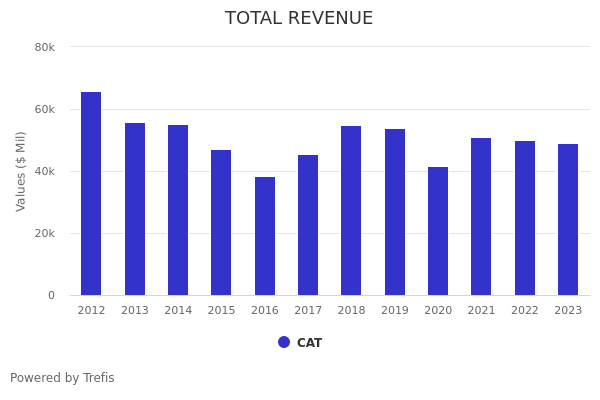 Is there a dip buying opportunity on Caterpillar stock when it has corrected by over 20% in 30 days?

Is there a dip buying opportunity on Caterpillar stock when it has corrected by over ... in null days?

What’s Next For Caterpillar Stock After A Mixed Q2?

What A Recession Would Mean For Caterpillar Stock?