Clearly unable to eke out any value from the failing retail banking sector in Greece, Citigroup (NYSE:C) has decided to significantly cut its presence in the troubled European nation. [1] The diversified financial giant is closing down 16 of its 37 branches in the country – pulling out of nine towns/cities and focusing all its remaining resources on the two largest cities of Athens and Thessaloniki. The move by Citigroup is hardly a surprise, considering the fact that the two other major international banks to have a notable presence in Greece – Credit Agricole and Societe Generale – are completely exiting their business in the country.

We maintain a price estimate of $37 for Citigroup’s stock, which is around its current market price.

See our full analysis for Citigroup

Greece has been in turmoil since the global economic downturn of 2008, with its debt situation spiraling out of control over recent years. The country’s fate remains strung to the various implemented and proposed bailout measures by other Eurozone nations – with the fear of the nation exiting the euro and its repercussion on the entire region forcing neighboring nations into action.

Greece’s bailout agreements, though, come at a price to the country. Greece has to abide by strict budget requirements imposed on it along with a string of austerity measures. A rather unfortunate consequence of these measures is a reduction in the demand for credit in the country. Hence, any bank that operates in Greece has to contend with almost no growth in its loan portfolio, even as the deteriorating debt situation leads to rising default rates for outstanding loans.

Citigroup classifies its Greek operations under its held-for-sale Citi Holdings division, which means that it is anyway looking to exit the business over time. According to its latest 10-Q filing, Citigroup has around $1.2 billion of outstanding loans to retail customers and small businesses in Greece. This is a small fraction of the almost $500 billion in loans the group has handed out globally. But this reduction in retail presence will clearly help save on expenses. The expected reduction in 170 jobs reduces Citigroup’s workforce in Greece by a tenth, and would also help it save on the branch-related real-estate and administration expenses. 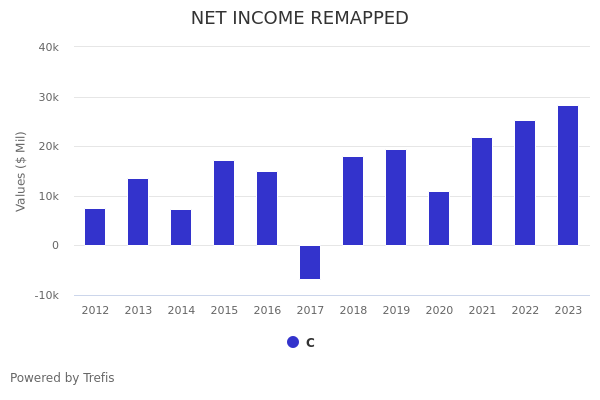 Why Citigroup Stock Moved: C Stock Has Lost 41% Since 2019 Primarily Due To Unfavorable Change In Price To Sales Multiple (P/S)

Is Citigroup Stock Attractive At The Current Levels?

With Recession Fears Mounting, How Is Our Inflation Theme Doing?

These Stocks Fared Well As Inflation Roiled Markets. Will The Outperformance Continue?