Bristol-Myers Squibb (NYSE:BMY) finally received regulatory approval in the European Union (EU) for its cardiovascular drug Eliquis for the prevention of heart attacks in patients with an irregular heart beat not caused by a heart valve problem, which is called non-valvular atrial fibrillation (NVAF). [1] The drug in its clinical trials showed higher efficacy in preventing clots and strokes compared to warfarin, which long has been considered as the standard treatment. This approval will allow the company to exploit the multi-billion dollar NVAF market in the EU.

Additionally, this approval is important for Bristol-Myers as NVAF indication for Eliquis is central to the company’s strategy of stemming the decline in its top line post the patent expiry of its blockbuster drug Plavix in May earlier this year. Eliquis is part of Bristol-Myers collaboration with Pfizer for co-development and co-commercialization of certain drugs. Also, the drug is currently pending approval in the U.S..

We currently have a stock price estimate of $33.59 for the company approximately 5% ahead of its current market price.

Eliquis prevents heart attacks by acting as a blood thinner. The clinical trials of the drug for NVAF treatment involved approximately 24,000 patients, which makes it the largest clinical trial program in this patient population. [1] The favorable results of the drug trial led the European Medicines Agency (EMA) to give a favorable recommendation for Eliquis for NVAF indication. This highly increased the probability of an approval from the European Commission that was finally granted on November 20.

Besides, Eliquis is already approved in the E.U. and the U.S. for prevention of venous thromboembolic events (VTE) in adults who have undergone elective hip or knee replacement surgery. And, currently it is in phase III trials for treatment of VTE. However, the market for NVAF is more lucrative.

The NVAF treatment market is currently dominated by generic drug Warfarin and patented drugs, Pradaxa and Xarelto. Pradaxa is owned by Boehringer Ingelheim and received U.S. approval in late 2010. Xarelto is co-promoted by Johnson & Johnson and Bayer and received approval in the U.S. in November 2011.

Eliquis, on the other hand, was denied approval by the US FDA twice for NVAF indication. Bristol-Myers resubmitted its regulatory application with the additional data sought by the agency and now awaits a decision due on March 17, 2013. However, on the strength of favorable results from the drug trials, approval in the U.S. is likely.

It is thus key to the company’s strategy for recovering from its Plavix patent cliff.

Understand How a Company’s Products Impact its Stock at Trefis 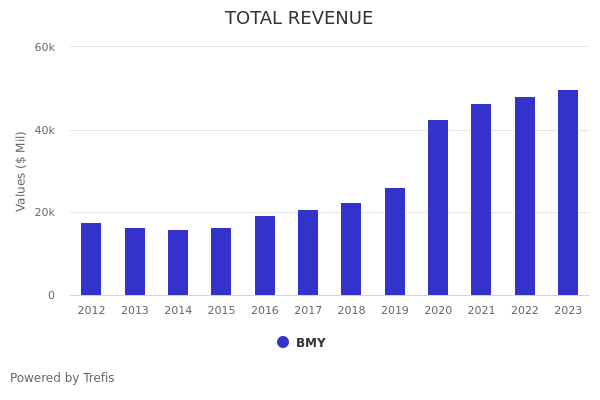 Why Bristol Myers Squibb Stock Moved: BMY Stock Has Gained 56% Since 2018 Primarily Due To Favorable Change In Revenues

Up 15% In A Month Will Bristol Myers Squibb Stock Continue To See Higher Levels?