BNY Mellon’s (NYSE:BK) foreign exchange business continues to be under pressure with one of its largest clients, Fidelity Investments, demanding stricter pricing on forex trades even as the largest custodian bank defends itself in several lawsuits alleging that it pocketed millions by inflating the exchange rates offered clients over years. [1] Although Fidelity has not sought any legal recourse for losses stemming from unfavorable exchange rates, it has significantly cut down its business with BNY Mellon over recent years and heeding to its demand may be the best course of action for the custody bank. Fidelity is using the same tactic to also force competitor State Street (NYSE:STT) to cut its forex rates.

We maintain a price estimate of $27 for BNY Mellon’s stock, which is about 10% ahead of current market prices.

BNY Mellon has seen a series of lawsuits filed against it since last October alleging that it misled clients into believing they were being given the best possible exchange rate while actually providing them with some of the worst rates. The substantial price difference boosted the bank’s foreign exchange fee revenues at the clients’ expense all the way back from 2001. The most notable of these lawsuits are those filed by the states of New York, Ohio and Florida against BNY Mellon. While the lawsuit by Virginia state was settled by the bank recently (see BNY Mellon’s Settlements & Diversification Plans Defend $27 Fair Value), the bank has also been able to partially settle with the New York Attorney General (see BNY Mellon Catches A Break In Forex Lawsuits).

While BNY Mellon denies any wrongdoing, the lawsuits did establish the fact that all transactions conducted by BNY Mellon as part of standing instruction agreements with its clients did not use the “best” exchange rate available as the bank advertised. This is what translates to millions of dollars in losses for clients ranging from government pension funds to institutional investors who used BNY Mellon’s services to exchange currency worth billions over the last decade.

Incidentally, Fidelity was the second largest customer for BNY Mellon’s forex business in 2008 and the biggest in 2010. [2] It paid about $59 million in fees to BNY Mellon over 2007-2010 and lost about $50 million to higher exchange rates on its standing instruction FX trades. It is hence no surprise that although Fidelity did not itself take BNY Mellon to court, it has been quoted on numerous occasions in the various lawsuits against the bank.

But itself under pressure to deliver lower costs to its customers, Fidelity is going after BNY Mellon to detail the actual rates applied to forex trades it requests for. The mutual fund firm is also asking for lower, more competitive rates than what it has received from the bank over the years. This move by Fidelity is likely to catch on among other BNY Mellon clients – something which will see reduced forex spreads for the bank in the time to come.

You can see how a reduction in forex trading fees impacts BNY Mellon’s total value by making changes to the chart above. 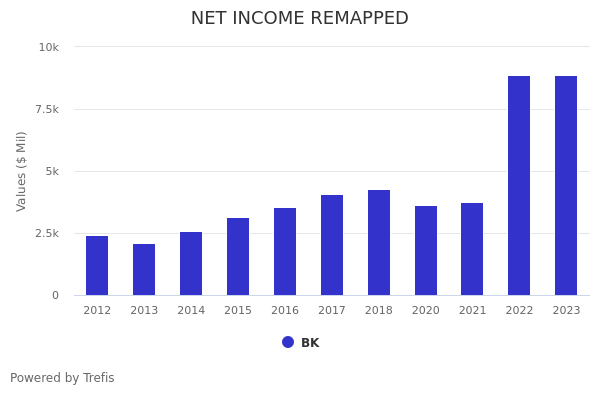 What to expect for Bank of New York Mellon stock, one day after earnings?

BNY Mellon Stock To Raise The Dividend By 9%, Is It A Buy?

BNY Mellon Stock Is Down 16% In One Week What To Expect?

What To Expect From BNY Mellon Stock In Q4?

BNY Mellon Stock Is Trading Close To Its Fair Value

BNY Mellon Stock To Beat The Street Expectations In Q2