Barclays (NYSE: BCS) has been extremely successful in reducing costs over the years, with the British banking giant slashing costs across expense heads to create £2.6 billion in savings since 2015. This should have helped the bank’s earnings margin (which is revenues net of all expenses expressed as a percentage of revenues) improve from 0% in 2015 to an estimated 15.5% in 2019 despite revenues remaining largely unchanged over this period. Although Barclays had to set aside another £1.4 billion as provisions for Payment Protection Insurance (PPI) in Q3 2019, we believe that 2019 will be the most profitable year for the bank since 2011 with its net income figure expected to jump nearly 80% from the figure in 2018. Trefis highlights trends in Barclays’ Expenses over the year along with our expectations for 2019 in an interactive dashboard, key elements of which are discussed below.

Notably, Compensation & Benefits (which represents employee salaries) are expected to be £8.4 billion in 2019 – making up 47% of the bank’s £18 billion in estimated Total Expenses for the year. While the bank spends the most on salaries, Operating Expenses (including general and administrative, infrastructure, and litigation and other charges) are expected to contribute ~39% to the bank’s total expected costs in 2019. 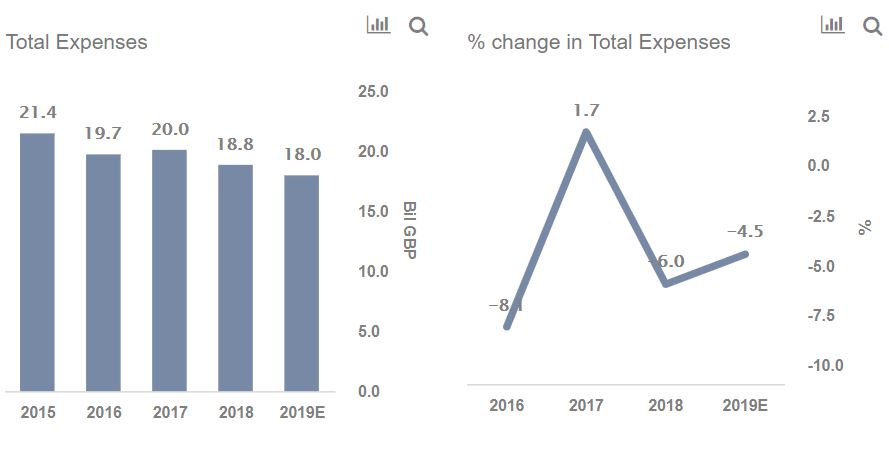 Additional details about how Barclay’s Provision & Other Expenses have trended are available in our interactive dashboard.

We expect Barclays’ adjusted EPS for full-year 2019 to be around £0.65 (taking into account the fact each U.S. ADR for the company represents 4 common shares). Using this figure with our estimated forward P/E ratio of 11.6x and a GBP-USD exchange rate of 1.3, this works out to a price estimate of $10 for Barclays’ stock – roughly 5% ahead of the current market price.

More Trefis Data
Like our charts? Explore example interactive dashboards and create your own.

After Earnings Miss In Q2, Where Is Barclays Stock Headed?

Barclays Stock Surpassed The Consensus In Q4, Is It A Buy?

Barclays Stock To Edge Past the Revenue Consensus In Q3?

Barclays Stock Has A 15% Upside

At $9, Barclays Stock Is Undervalued

Barclays Stock Is Trading Near Its Fair Value